A group of people, lead in no small part by Antonio Buehler, and perhaps George Donnely, has set out to rid the internet of naughty language, and pretty much everything else they disagree with. I told you before that this would not end with me, and here is more proof of it.

This is not a simple matter of a private company choosing who it lets use its services. Most of the reports are fraudulent, but Facebook’s monitors are not apparently very good at determining what actually constitutes “Hate Speech/Symbol” or “Graphic Violence” or “Nudity/Pornography”, since none of these things were posted, and we’ve still been banned for posting them. These reports are fraudulent and they are being used, at least in my case, to disrupt a business.

This is fraud, an act of aggression. It is a violation of the Non-Aggression Principle. Not that this should surprise anyone, since it’s coming from a bunch of liberals who are only pretending to be libertarians.

Here are some of the known perpetrators

George Donnely has been attempting to organize a “Whistleblower” organization, to defame fellow libertarians for months. 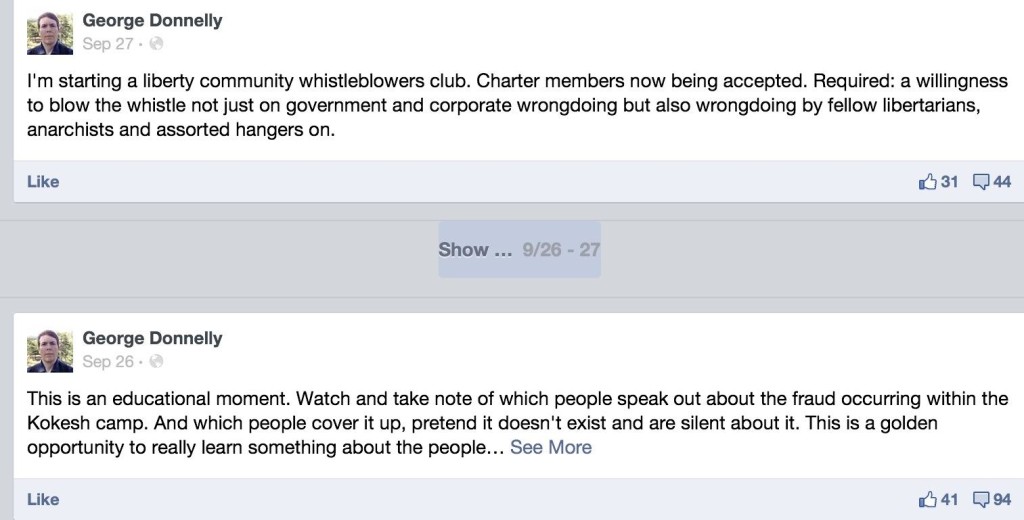 They have been known to organize inside the “Libertarian Anti-Racist Alliance Discussion Group” a leftist outfit known for posting gems like this one,

Yes libertarians, your “Heyekian Knowledge” is a problem, that must be overcome swiftly…

Information is still being gathered. These people are aggressors, they are committing fraud, they are NAP violators, and I intend to treat them as such. I would encourage others to do the same.