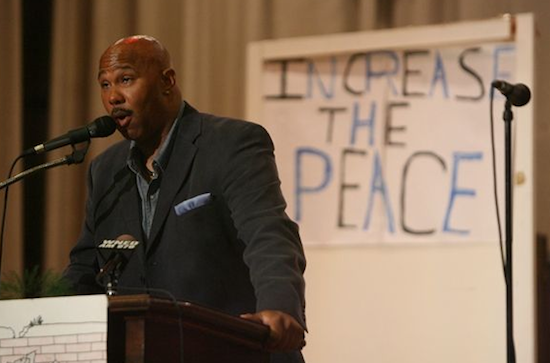 Dwayne, a concealed carry permit holder, campaigned relentlessly for New York’s “SAFE Act”, a sweeping and reckless gun control bill crammed through the system in the wake of the Sandy Hook shooting in Connecticut. The 52 year old activist is a community organizer in his home town of Buffalo, NY. His work in drumming up support for the SAFE Act is in no small part responsible for the passage of the law, which makes carrying a gun on school grounds, even if you have a license, a felony.

Ferguson is the head of the Buffalo chapter of MAD DADS, an acronym for Men Against Destruction Defending Against Drugs and Social Disorder. Originally formed in 1989 by a group of Nebraskans concerned about drugs and gang violence, MAD DADS now boasts over 75,000 men, women and children nationally, with 60 plus Chapters in 17 states.

Like every other organization that is not expressly anti-liberal however, it seems to have been co opted by leftist radical gun control fanatics like Dwayne. Thank you Saul Alinsky.

So why does a liberal gun control nut, get a carry permit, and commit a felony he helped make a felony? Why do other left wing radicals say he should be let go?

Because hypocrisy is the whole point of liberalism.

When you say it plainly, liberalism sounds awfully violent, racist, and sexist, doesn’t it?

Point out these obvious contradictions, and of course you will be labeled a violent, racist, sexist, homophobic endless string of ad hominems.

Feeling pretty good about yourselves, aren’t you, conservatives? Ha! Tricked ya!

Laws don’t apply to liberals for the same reason they don’t apply to conservatives, because it’s all crap. Statism is the ultimate hypocrisy. The State purports to keep us safe from harm, by putting us in cages and provoking wars with foreign nations. It claims to protect us from theft, by stealing our money through taxation, inflation, and citation. It claims to keep us healthy by giving us miserable disasters like the food pyramid, and a myriad of FDA approved poisons who’s “side effects” are worse than the diseases they fail to cure.

Everyone who wants to pass a law is a hypocrite. Whether it’s a ban on guns or a ban on gay marriage, it’s nothing more than an irresponsible way of feeling good about oneself. So nobody should be surprised when the people who say these things the loudest, turn out to be the biggest frauds among us. Whether it’s a gun toting liberal, or a cock sucking conservative, the constant is always the State, and the perpetual hypocrisy of its supporters.