If you want to know what’s wrong with America’s politicized economy, look no further than Fox. If these are the main stream media advocates for conservatives, for free market economics, it’s no wonder America has such a tightly regulated economy.

My daily routine includes scanning social media and Google News for stories to write about, and every once in awhile I find an article so ridiculous I have to respond to it directly. Such was the case today when I came upon a story in Fox Business titled “A Grade School Kid Can Predict Cable-Deal Fallout“. I can understand the position the author, Dunstan Prial was in. When you have to come up with timely content, sometimes you get desperate. Still, I think when you start asking your children for economic policy advice, to publish on Fox Business, it’s time to look for another job.

The article addressed the widely publicized merger deal between Comcast and Time Warner cable. In typical neocon advocacy of central economic planning, the author goes on to blast the deal as a dangerous monopoly that must be stopped by the full weight of the FCC and Department of Justice. Here’s how this grade school economist came up with the story…

What happens, I asked them, to the price of a product or a service — say, cable television — if there are two companies out there that provide that similar product or service?

In other words, if those two companies are competing for customers what’s the best way for one of the companies to attract customers to its product or service — say, cable television — rather than its rival’s?

They thought about it for a moment, but not for very long. Lower their price, they said at almost the same time. Indeed, I said, to fist bumps all around.

Now, I continued, what would happen if those two companies joined together and there was just one company left providing that product or service — say, cable television — and customers had no choice but to buy from that company.

Again a pause, but not for long. They could charge anything they want because there’s no place else to go, the boys concluded, following my train of thought. 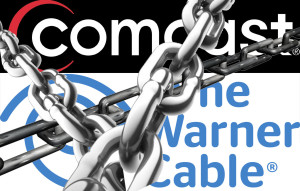 First of all, Dunstan, we’re not talking about the water supply here, we’re talking about cable television. If somebody doesn’t like their cable television service, they have a wide range of options, the most obvious of which is to not subscribe to the service at all. Nobody needs cable TV, and as a matter of fact, I think we’d all be a lot better off if fewer people were watching it, especially if they are getting their economics news from Fox.

Secondly, Time Warner & Comcast do not compete with each other in the same territory. If you have Comcast in your house today, you cannot call Time Warner and switch providers. These companies already have a monopoly on cable television service in the territories they cover. Those monopolies are the result of government regulation, not the greedy capitalist boogymen that keep people like Prial up at night. Don’t believe me? Go ahead, try and set up your own cable company. Without government permission, go buy some coax, and try to run it along the telephone poles, or begin digging trenches in the road, I promise you’ll be in prison before you service a single customer.

Third, the whole point of the merger, is that competitors are eating into their business. Verizon Fios, Satellite TV, streaming video services, oh, and FREE broadcast HDTV, are all cutting into their bottom line. Do I need to mention people generally realizing that TV isn’t worth the time or the money? That the programming is absolute crap, especially the news? How you can look a merger born out of competition, and scream monopoly, defies simple English, and doesn’t even come close to any sort of economic reasoning.

Prial goes on to quote Common Cause’s Michael Copps, a former FCC commissioner, as saying “This is so over the top that it ought to be dead on arrival at the FCC. The proposed deal runs roughshod over competition and consumer choice and is an affront to the public interest.”.

What “advocacy” groups like Common Cause, and left wing idiots like Prial fail to understand, is that Comcast and Time Warner are not in this for the “public interest”. They are in it to profit, and increase the value of the company for their shareholders, to not do so, would be negligence on their part. The cable company is not a democracy, it’s not even a constitutional republic, or a federation of States, it is a privately owned, publicly traded corporation, and it’s none of the DoJ’s business what they do. If they raise prices, or lower their quality of service, it is up to the consumer, not the FCC, to decide whether or not to continue doing business with them.

At last count about 100 million Americans were still paying for cable, nearly one-third of whom (an estimated 30 million) would be consumed into Comcast’s empire if the merger is approved. That’s a lot of angry voters. Which should translate into a frenzy of Congressional hearings and media attention ahead of any ruling by the Justice Department or the FCC.

When Comcast CEO Brian Roberts (apparently a pretty good friend of President Obama’s, by the way) is called before Congress to justify approval of his mega-deal, it will presumably be easy for any self-respecting, attention seeking, vote grasping Congressman to frame this issue in a context similar to that which I laid out for my kids.

This would be an astute observation if it were aimed at calling congress a bunch of spineless political opportunists, but Prial seems to support this ludicrous behavior. Who the hell do these people think they are? Imagine you wanted to buy or sell something, and a “frenzy of Congressional hearings” ensued! The fact that Congress will overstep their constitutional boundaries, and harass these businesses just because they think it will satisfy the ignorance of their constituents should outrage the public, not give them comfort. The default position of Congress should always be to do nothing. The constitution purports to grant this body of megalomaniacs a limited set of powers, and deciding who sells cable TV isn’t one of them.