Long missing from this cesspool of a website, is a category for relationship advice, and posts to fill it. Just in time for Valentine’s day, a post came scrolling from my now defunct facebook feed, that just screamed “Chris! Please Destroy Me!”, and I am just so happy to oblige.

The article, titled The Problem with ‘Nice Guys‘, published in 2012 by “Dr. Nerdlove” was actually a good read. I would encourage you to check it out. I even subscribed to the blog via email. The author makes some really valid points about creeps who pretend to be nice guys in an effort to get into a girls pants by deception, a truly despicable practice that is entirely too common. 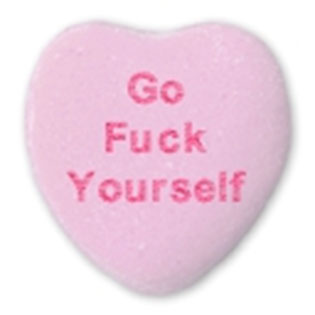 On the other hand, he goes on to disparage every man who has ever complained about a very real tendency in women to prefer assholes over guys who actually treat them with respect. As a one time nice guy turned asshole myself, I can tell you this is not something to be dismissed lightly. There are countless women out there complaining how all the guys they meet are assholes, and for every one of them, there’s at least one former nice guy who decided being a nice guy just plain wasn’t a winning strategy, because she displayed this preference.

Mind you, I’m not complaining. This works out pretty well for me. Certainly, I bear the emotional scars from years past, and repeated rejections of my “Nice Guy” approach, but what I’ve learned is, chicks dig scars.

They also want what they can’t have, and this is a human thing, not unique to women. It doesn’t matter what you have, you always want something else, something more. Nobody is ever truly satisfied. At best, you settle for what you’ve got, at worst, you struggle in perpetuity and die miserable. If you’ve got all the love in the world, you want money. If you’ve got money, you want love. If you’ve got both, you want more of both.

This isn’t in and of itself a bad thing. Imagine if you will, a world where people had been perfectly satisfied with mud huts and the belief that sickness was gods punishment for sins. If that seems a little too much to imagine, then think of a world stuck in 1955, black and white TV’s with bunny ears, and those awful cars that men with too much time and money on their hands spend fortunes restoring today. Hell, just imagine mankind never digs itself out of the shit we’re in now! Any of these time periods could be compared to any time period before it and look luxurious by comparison, but man’s perpetual dissatisfaction with the world around him, his constant hunger for more, is what leads him to improve it, and overall, we’re all more healthy, wealthy, and comfortable as a result.

On the other hand, I sometimes worry if this tendency in relationships might lead to our extinction. Though, after watching Idiocracy a few dozen times, I’m fairly certain it will simply lead to all of us being borderline retarded.

Women want what they can’t have, men too, but when it comes to relationships, women are absolutely worse with this. A guy might want to fuck the supermodel or the movie star, but he sort of accepts that this isn’t going to happen and seeks out someone closer to his level. He has to, his sex drive simply will not allow him to chase that which he cannot have forever. Eventually he will get sick of wet dreams and jerking off and take a mate who makes herself available. Women have fewer obstacles to sex, they are the guardians of the gates. If her sex drive is the issue, and she’s willing to put her shame in a drawer somewhere, she can generally make a phone call or show up at a bar and have that problem taken care of for her.  Her obstacle, the thing she has trouble finding, is the emotional availability of the male.

Think about how a man might look at a woman who throws the pussy at him as a slut. He doesn’t outright reject her usually, he’ll take said pussy, perhaps numerous times, keep her around until she demands some emotional attachment, at which point this purely sexual relationship will come to an end. She didn’t demand it up front, but she sort of expected that emotional attachment, and now she feels like she got taken advantage of. Women do the same thing to men who are easy emotionally. One of the many mistakes the nice guy makes, is being an emotional slut. He throws the emotional attachment at the female, without demanding anything in return. She takes it, uses it for what she can, and then discards it without reciprocating with physical intimacy. He didn’t demand it up front, but he expected it nonetheless, and now he feels like he got taken advantage of. Hence the internet ramblings from both genders on how all guys are assholes, and women want nothing but assholes. Neither of these people necessarily set out to do anything wrong, they just took what was offered to them.

It’s a simple truth that women trade sex for love, and men trade love for sex. Perhaps not exclusively, but it’s sort of like people tend to trade money for goods and services, and occasionally donate to charity. In either case, that’s not a bad thing. Women enjoy sex, and men enjoy love. So like most trading we do, we both are better off afterwards. We don’t tend to put price tags on it outside of therapists and other prostitutes, but we tend to expect what we expect in the course of our transactions nonetheless.

Now, personally, I don’t believe in sluts. I really like when a woman throws herself at me, it tells me she’s very attracted to me, that makes me feel good about myself, and I don’t think less of her for it. All of my long term relationships started this way. But I hear that this is abnormal. I’m told that most men prefer a chase. Those guys are fuckin nuts, but whatever.

How many guys reading this article have remarked at the phenomenon of more women wanting to sleep with him, while he has a girlfriend, than when he is single? I know I have, it’s fuckin ridiculous, but I imagine most men have been through it. She can’t have you, and so she must have you, and she will tempt you with her body to get you. That’s why websites like AshleyMadison.com are such a huge success, that they can actually give you a money back guarantee if you don’t manage to land an extra marital affair.

If she doesn’t want you, nothing you can say or do for the sake of changing that is going to work. Whether she finds you physically attractive, or intellectually stimulating, or whatever it is she’s looking for in a man, is going to be determined by your unintentional acts, not your intentional acts. Your intentional acts, are deceptive in nature and unless you’re a fucking sociopath and a pathological liar, she’s probably going to pick up on that, and even if she doesn’t, you’re building this relationship on a false premise and it is doomed. The age old “just be yourself” line rings true for all time.

As soon as men figure this out, which we must if we hope to remain part of the gene pool, we tend to be a little bit colder towards women, and the nice guy approach is rightfully resigned to the dustbin of our adolescence. Unfortunately for women, that means a lot of you will get fucked tonight and left tomorrow. For this, you’ll call us assholes and complain that there are no good men left in the world, and you’ve got a point, but you have nobody to blame but yourselves. Sure, some guys pretended to be nice guys in hopes of deceiving you, but some of us were genuine, and you proved to us that this approach doesn’t work. The only good news is, a lot of us are sick of this bullshit too. So maybe someday you drop the whole “my pussy is the most precious thing on earth” routine, and we’ll drop the whole “I just want sex” bit, and we can get back to populating the planet before some rogue government weapons program exterminates the human race from this shit hole planet.