Some people just love civil unrest for the sake of civil unrest. It can be tempting to jump on board, especially because massive uprisings for all the wrong reasons, certainly seem better than just going along with the will of the ruling class. Still, seeing people fight to the death over who should be their slave master, really makes me sad. 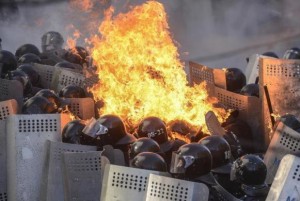 The numbers vary depending on who you listen to, but as many as 20 protesters and 7 police are dead in Kiev today, after government forces attempted to end protests by force. It was the bloodiest day since Ukraine gained her independence from Russia, and sadly, the issue at hand is which foreign government Ukraine should sede said independence to.

“Turn Ukraine into a European country” said Stepan Kubiv, a lawmaker in the national parliament for the pro-Western Fatherland party, as he read the demands of the protesters. In November, the revolution began when Ukrainian President Yanukovych refused to sign an integration deal with the E.U., choosing instead to pursue closer ties with Moscow. On Feb. 7, at the opening ceremony of the Winter Olympics in Sochi, Yanukovych met with his Russian counterpart, Vladimir Putin, to discuss the crisis, and although the results of those talks were not made public, the Ukrainian leader has since ceased his earlier policy of appeasing the protesters and has begun preparing for a stand-off. The riot police moved in hours after Moscow gave Ukraine $2 billion in aid for its crippled economy, part of a larger aid package which it had been holding back to demand decisive action to crush the protests. 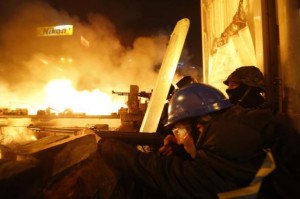 Police attacked protesters with water cannons, tear gas, flash bangs, and of course, guns as they approached the square that protesters had taken over. The protesters responded with molotov cocktails, rocks, bottles, and even guns of their own.

These people can’t even think so far as to maintain their own national sovereignty, good luck trying to convince them to fight for their own personal sovereignty. So please, libertarians, stop cheering for these people. This is nothing more than one more pro government, leftist sideshow. They are not revolutionaries. They are gladiators, simple slaves who fight and die for the benefit of the State, entertaining the masses with bloodshed, and in the end it doesn’t make a shred of difference who wins. Whether they are ruled over by their own countrymen, or Russia, or the EU, these poor people are hopelessly enslaved by their belief that they must be ruled over at all, and until they shake that superstition, the blood and tears shed in Kiev will amount to nothing more than drops in an ocean of Statism.