To many of us, a law banning Internet Service Providers (ISPs) from blocking or otherwise tampering with certain content or protocols on the web, almost sounds like a good idea at first. I certainly don’t want my internet connection filtered for any reason. I’ll manage my own firewall, thank you very much.

It especially appeals to those on the left, who view “corporations” as the enemy, and the State as their savior.

On the other hand, trusting a bunch of old rich guys who spend most of their time hundreds of miles away from you, and are today best known for waging wars and spying on people, to manage a global communications network as complex as the Internet, by force, spells nothing but trouble for those of us who are paying attention.

The New York Times is reporting that FCC Commissioner Tom Wheeler, is about to announce such a set of regulations, after another attempt at “Net Neutrality” was shot down by a federal appeals court last month. The move comes as advocates of central planning stage a panic over a merger deal between Comcast Communications & Time Warner Cable.

The ruling last month did as most such cases do, by expanding the power of the Federal Government under the guise of limiting it. The case came as ISPs challenged 2010 regulations preventing them from making deals with content providers such as Netflix, to give them a “fast lane” to consumers, for a price. The FCC argued that this would give large corporations an unfair edge over others in the market, and the court ultimately decided in favor of the ISPs.

Since the Internet wasn’t exactly a regular part of daily life in 1789 when the US Constitution was ratified, and no constitutional amendments pertaining to the internet have since come to fruition, this seems like a correct decision, and it would have been, if the court had left it at that. Since when do courts actually limit federal power though? The answer is never. Although the court, the United States Court of Appeals for the District of Columbia, found that the regulations preventing the deals were invalid, it said that the commission did have some basic authority “to promulgate rules governing broadband providers’ treatment of Internet traffic.” It also upheld agency rules requiring broadband companies to disclose how they manage their networks, powers the FCC didn’t hold at the time.

After the case, Verizon, a plaintiff in the case, said in a statement “Verizon has been and remains committed to the open Internet, which provides consumers with competitive choices and unblocked access to lawful websites and content when, where and how they want,”. 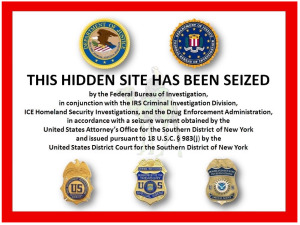 Here’s the thing folks, every time I have ever tried to visit a website or find content that was blocked, it wasn’t my ISP preventing me from reaching it. It’s the government causing those DMCA notices to appear in my Google search results. It was government badges that showed up on the Silk Road’s front page when Ross Ulbricht was hauled off to a prison he will likely never leave.

My ISP does block certain protocols on my home Internet connection. For example, my home computer cannot receive incoming connections on HTTP port 80. There are also certain “reasonable use” limits on upstream bandwidth, which if exceeded, will result in my Internet connection being throttled (deliberately slowed down by the provider). These are to prevent me from running servers on my low cost home Internet connection, which doesn’t normally require these things. There is a simple solution to those limitations however, I upgrade to a more expensive business class package. 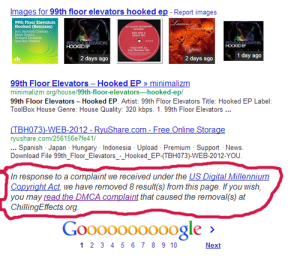 There is no package I can purchase on the other hand, to remove the DEA badges from the Silk Road, no amount of money I can pay to get back those search results Google removed as a result of DMCA notices. There is no competitor I can switch to and escape the NSA’s PRISM program. If you’ve ever gotten a “love letter” from your ISP about peer to peer file sharing (I have), remember that this is your ISP responding to a threat of winding up in a government court room in a lawsuit with a copyright holder, not their evil plot to spoil your fun.

If you’re worried about losing access to content on the Internet, your enemy is pretty clearly defined, and it’s not your ISP. What makes anybody think that giving more power to that enemy is going to improve their life?

Additionally, blocking certain types of content or protocols at the provider level could actually prove to be a valuable service. If NetBIOS port 139 had been blocked in the early 2000’s for example, I wouldn’t have been able to hack thousands of computers and build a botnet to terrorize rival IRC networks. A technique no doubt deployed by thousands of other, more malicious hackers who used the same technique to steal banking and credit card information from unsuspecting Internet users.

I mentioned earlier that I prefer to manage my own firewall, but how many people actually know how to do that? How many people actually understand the previous paragraph of this article? Relatively few. Security services at the provider level could actually help a lot of people. Hell, perhaps the ISPs could help prevent the NSA from spying on you, instead of helping them…

Currently, GMail scans your email for viruses, and prevents sending of passworded zip/rar files which it cannot scan. Chrome, by default, blocks access to websites it sees as malicious. Sometimes I find this annoying, either because it returns a false positive, or I want to send a passworded file, or because, as a guy interested in computer security, I actually want to observe the malicious content for some reason. There is a very simple solution to these problems, use a different provider or protocol for obtaining this content. Like most problems, the answer is competition.

If you had a free market for Internet services, then once one provider became too restricted for your liking, you could simply switch to a different provider, and the threat of going bankrupt would prevent ISPs from becoming too restrictive. Good luck doing that today. Here in Long Island, I have two choices, Verizon, or Cablevision, and for all the differences between them, it might as well be Republican or Democrat, except of course for the fact that in the case of the ISP, I can choose not to use the service at all, not the case with Republicans and Democrats.

Go try and put up a cell tower, go try to run some fiber optic, coax, or twisted pair cable through your neighborhood, go try to launch your own satellite into outer space. You’ll quickly find your biggest obstacle, the force more difficult to overcome than gravity, is the State. A more heavily regulated market for ISPs will only make matters worse for new companies trying to enter the ISP market. I’m very good at running cable and managing networks, I am not good at filling out complex government forms and representing myself in court. The government tends to like it that way, because in their perpetual efforts to control every aspect of our lives, it is a lot easier to coerce two CEO’s of giant service providers, than it is to coerce the entire population.

If you really want the net to remain, or should I say, become, neutral, then we need to get rid of the United States Federal Government, not empower it. They are the biggest control freaks on the planet.