I’ve spent a ridiculous amount of time studying “sovereign citizen” literature, videos, and audio recordings. Between Michael Badnarik, Creditors in Commerce, various PDF’s, texts, and websites, I’m talking over 200 hours. Believe me when I tell you folks, what I am about to say is not spoken out of ignorance, but careful study and painful experience.

First, the good part. This whole thing serves a purpose. It teaches people to study the law and stand up for themselves, it encourages people to disobey the ridiculous edicts of State agents, and it played a large part in my radicalization, as well as others. For these factors and others, we should all be grateful to the “sovereign citizen” movement.

On the other hand, it’s almost complete nonsense, and most of the people claiming to be “sovereign citizens” in practice, are completely full of shit. Those unfortunate enough to fall for these lies will likely find themselves indebted, imprisoned, or dead. The theory behind this is basically that there is some is some underlying system of government that most people simply do not see, that the fabled “republic” of the good ole days is not only a true story, but still exists today, and most people operate in “the democracy” simply because they don’t know any better.

Let’s analyze this a little bit. I’ll start with the image that just came rolling through my Facebook feed that prompted me to write this article. 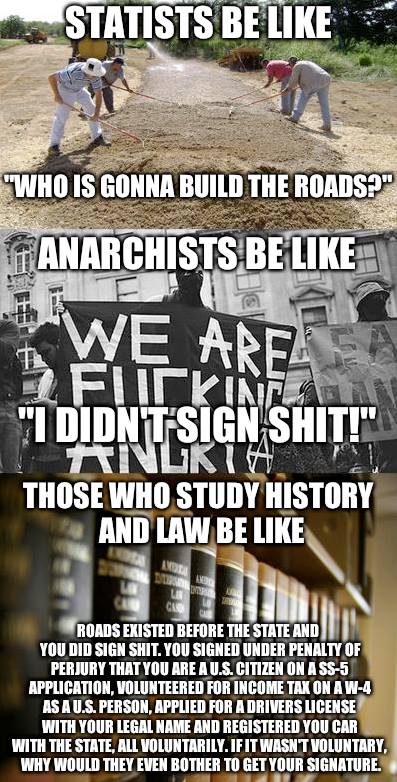 OK, statists are kind of ridiculous with their roads, no disagreement there.

OK, anarchists don’t agree to this “social contract”, no disagreement there.

Um, no. I never signed an SS-5 application. Nowhere in any government records will you find my signature on an application for a Social Security card. The first time I ever saw “my” Social Security card, was when I was 16 years old and trying to get my first “on the books” job, and my parents gave it to me along with “my” birth certificate.

Nor did I ever “volunteer” for an income tax. Certainly, my employer was coerced into putting his employees on a taxed payroll system, along with nearly every other employer. So there have been times where I signed a W4 in order to avoid starvation, but it’s not as if this form is voluntary or is the only reason I’m charged an income tax.

There is no income that you are not legally obligated to report to the Federal Government. Even if I barter lawn maintenance for hair cuts, we’re both supposed to assign dollar values to those services and report them to the IRS. As far as the government is concerned I have no choice as to whether or not to file tax forms, the only question is which form I file to avoid armed men breaking into my home, kidnapping me in front of my family, putting me in a cage with dangerous criminals, and murdering me if I resist.

In order to fill out those forms, I need government issued identification. True enough, this doesn’t necessarily have to be a drivers license in every case. I can have a passport, or military ID instead if I prefer, but again, not voluntary.

Did I “voluntarily” register my car with the State? Of course not. In many places, it’s illegal to even keep an unregistered vehicle in your own driveway. If I attempt to drive an unregistered vehicle on the highway, armed men will “pull me over”, which if you’re not familiar, means threatening to murder me if I don’t stop my car when they flash threatening lights and sounds at me. Any attempt at non-compliance with a traffic stop, will lead to a deadly altercation, as we saw with Jerry & Joe Kane back in West Memphis in 2010.

Jerry was one of these “Sovereign Citizen” guru types. He traveled around the country charging people money to tell them how the “Uniform Commercial Code” could wipe out all the debts that they actually did incur voluntarily. He told them that they could legally drive around without a license or registration. A claim that would seem disputed by his multiple arrests, fines, and community service sentences for doing so, before he was ultimately shot to death for resisting.

The theory here is that all law is contract. According to sovereign citizens, the only reason government agents are aggressing against you, is because you agreed to it in some sort of obscure linguistics based chess game. For example “Do you understand?” they claim, means “Do you stand under [my authority]?”. Well, even if that was true, it would mean that we were being defrauded into these contracts, and under the same “common law” they claim to live under, this would be fraud and the contract would be void.

So clearly, that’s complete nonsense, which is why guys like this end up learning the hard way.

Unfortunately, people see videos like this one, and think this means they can win in court just by refusing to identify themselves.

Unfortunately, people who attempt these stunts are not the most diligent researchers. For example, reading the description of the video that you provide as proof for your legal advice.

Uploaded on Jul 7, 2011
June 7th, 2012 UPDATE: there is a lot of supporting data on this subject but this case appears to have gone wrong, and this man did get arrested. The subjects of admiralty law, corporate citizenship and “strawman identities” remain very interesting to me.

Another paradigm-bending look into the weird world of common law, admiralty law and what people are doing with this knowledge. I don’t understand how this is all possible, but it is very interesting.

As Jenna finds out the hard way, there’s no reasoning with government agents. She attempts to avoid jurisdiction by telling the 911 operator that pulling her over will incur a $300,000 fee. The 911 officer obviously doesn’t agree. Before you watch the video, take a guess at how well this turns out for Jenna. The video goes from simple transcript to actual police video around the 10 minute mark.

If you watched the video, you already know that Jenna’s attempts to negotiate turned out rather poorly.

Why? Because government is force.

Think about it, “sovereign citizen”. The average cop is not that smart, in fact, he’s probably a dumb fuck. Instead of going out into society and creating wonderful things to benefit his fellow man, he took a job that discriminates against people with high IQ’s, where he runs around with a gun stealing, kidnapping, and murdering people. Do you know a lot of really smart thugs without badges? Nobody ever got turned down for the job of “Armed Robber” because his IQ was too high, but cops do get turned down for this reason. You don’t completely understand what it is you are saying (or you would know better than to say it). If you presume yourself smart enough to talk your way out of the laws that pretty much everybody in the world is convinced they are legally obligated to obey under threat of force, you must think that you are smarter than everybody else. If you are smarter than everybody else, and police are dumb as rocks, how do you expect them to understand that which you yourself do not?

The sovereign citizen makes the same mistake as every other statist. They assume that there is some system of laws governing the behavior of violent criminals. The truth there is not. These are just animals roaming about the wilderness, doing as they see fit. Stop making this ridiculous mistake of thinking the government is somehow going to work out in your favor. It is nothing more than a system of fraud and coercion.