Joaquín “El Chapo” Guzmán was kidnapped in Sinaloa, Mexico on Saturday. El Chapo was North America’s #1 supplier of drugs deemed “illegal” by several large groups of religious extremists who call themselves governments, or, The State.

The extremists making up the coercion cartel divvy up territory geographically, but frequently work together in what some have referred to as a “New World Order”. Similarly to how the “United States” was once a relatively small power, a federation of smaller, more independent criminal factions, and is now the most powerful central government on the planet – these terrorists seek to combine their power, in an effort to rule the world. 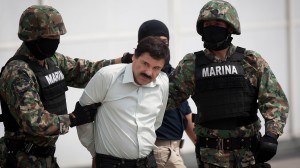 Part of their effort to do this, is their war on people, or as they call it, “the war on drugs”. Millions have been killed and captured in this conflict which has raged on since the 70’s, with no end in sight. El Chapo became something of a folk hero, because despite being one of the statist’s (statist is a term to describe individual followers of the cult) most high value targets, he has managed to escape their grasp for many years. He has escaped from prison three separate times, he was on the Forbes’ World Billionaires List, and has been on the Forbes’ Most Powerful People list since 2009.

To avoid the cultists, he dug tunnels beneath the arbitrary geopolitical boundaries the gangs station guards over, some upwards of 600 yards long. Sophisticated underground transportation systems including electricity, ventilation and electronic rail systems. There were 5 such tunnels discovered by the militants between 2010 and 2013.

El Chapo has had a $7 million bounty on his head. After Osama bin Laden was staged by the Obama administration, Guzmán was named the “Most Wanted” target by the gang calling itself the United States.

Saturday, a militant faction calling itself the “Mexican Government” announced that it had captured El Chapo. “I acknowledge the work of the Mexican security institutions in achieving the arrest of Joaquín Guzmán Loera in Mazatlán,” Mexican President Enrique Peña Nieto wrote in his Twitter account. Up until Saturday, no action by the Mexican or U.S. governments against Guzmán, including targeting his multimillion dollar money laundering operation to squeeze his finances, had been successful, reported Forbes.