An image came floating through my twitter feed, repeating an NRA slogan which, as tempted as I am, I cannot agree with, and I am a gun rights advocate. To the limited extent which the National Rifle Association prevents government from using violence against gun owners, I support them. Still, I believe their dependence upon the State, and perpetual desire to feed it more power, is a detriment to us all.

Firstly, the NRA is, by its very nature, a creation of the State. It exists only because the State threatens to deprive us by force of our arms. I don’t mean to disenfranchise those who seek to prevent this from happening, but I do think it important to understand that the NRA benefits from gun grabbers in office. The greater the threat to gun rights, the greater the budget of the NRA.

The pleasure of money, after all, is in the spending. Even if the salary of the average NRA employee changes not one bit, his ability to enjoy money, and the power thereof, is increased when a man like Barack Obama enters office. Between ignorant racial sentiment, and legitimate concern over policy, dollars have poured into the NRA over recent years at unprecedented levels. 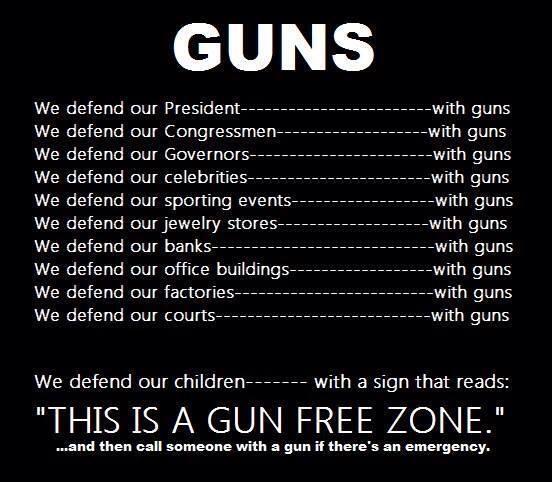 Is their solution to further limit the power of the State? No. Quite the contrary. Their solution is to arm agents of the Department of Education.

As if police abuse wasn’t dangerous enough for our kids, now the NRA wants to put guns in the hands of yet another unaccountable public sector union. As if we don’t already hear enough stories about teachers raping, and assaulting students, now we’re going to have to hear about their use of firearms in the course of their crimes. All of course, while the parents and students are disarmed.

And who really believes for one second that some leftist teacher’s union scum is going to do anything positive with a gun anyway? This miserable piece of shit makes his entire living teaching children that competition is a sin, and all of a sudden he’s going to try to win a gun fight? I fucking doubt it. I think it far more likely that the next mass shooting we hear about will be some socialist kindergarten teacher, reading his antipropertarian manifesto as he guns down toddlers in his class, and then demanding a raise as he’s hauled off to prison.

Do I have a problem with guns in schools? No. In fact, I think teaching young children about weapons, and sending them to school armed, is a great way to prevent bullying.

Do I have a problem with teachers arming themselves? No. In fact, I believe that teachers should have the means by which to protect themselves from aforementioned armed students, should their parents fail to teach them proper firearms etiquette.

Do I believe “we” should be doing any of this? No.

Celebrities, sporting events, jewelry stores, banks, office buildings, factories, these are all things the owners of which, protect with guns. I support their right to do so, but they aren’t going to raise my taxes to pay for them, and they aren’t forcing my children to participate.

If there was a free market for education, I would only pay for a school that had armed guards. I would demand my child be protected at all costs. Unfortunately, this is not the case. Teachers in public schools are doing plenty of damage with books and black boards, and I cannot fire them. I do on the other hand, outgun them, and I do not want to see the NRA change that balance of power.