Peace News Now host, Derrick J. Freeman published a blog titled “Chris Cantwell is All Wrong” today, and in the process, proved the exact opposite. The post is also mirrored at Free Keene, under the title “Peaceful Evolution Not Violent Revolution“.

To his credit, Derrick did not take the path of other negative commenters by repeating the fallacies that I dispelled in the article. He instead brought forth others, which I neglected to address in the original piece.

There’s nothing special about you or this time. You aren’t owed freedom in your lifetime, but you can have it.

Derrick here asserts that slavery is an acceptable outcome to this struggle. These two sentences demonstrate better than any number of pages that I could write, the problem with those who reject use of force. They are not serious about solving the problem, and allowing the problem to persist is right at the top of their list of options.

Freedom is my birthright as a human being. I am owed freedom. So were black slaves, and the Jews of the holocaust. The fact that these peoples before me did not get their due, does not imply that I must suffer the same fate, nor that I am somehow lucky that my slavery is so much more tolerable than theirs. What it does imply, is that I must act if I wish to avoid following down the same path to being chattel or maggot food.

Right now, the State is good for some things, for some people.

The people have to be won, they have to be sold on the idea. If people arrest the politicians, they may cheer, but does that mean they have a foundation for independence? No. Most people would do very poorly in a situation of freedom because they have been conditioned to living in prison planet. It’s not only bad strategy, it’s immoral to impose a situation of freedom onto a population that can’t cope with it.

Imposing freedom on people is immoral? Let me remind Derrick and the other appeasement advocates that in the absence of the State, these slaves are more than welcome to submit to any authority they see fit. What they are not welcome to do is threaten my life, or put me in a cage for not submitting to the same! To say anything less is to grant the State legitimacy and become complicit in its crimes.

Again, he just drives home what I’ve been saying all along. The problem with rejection of force, is that it allows the State to perpetuate itself. So much so, that I have anarchists now standing up for its existence! The carnage of the State must be allowed to persist, because anarchists have some moral obligation to violent, lazy, irresponsible statists, not to disrupt their pathetic insignificant lives. Social contract much? I don’t fuckin think so!

I see things much differently. I say that it is better for three hundred million statists to be hacked to death with machetes, than for one anarchist to be let off with a warning from a cop. It is better that all the world starve in a free market, than a penny be taxed in the name of feeding the poor. It is better that the streets of America be paved with the bodies of police and politicians than for one drone to harm one hair on one child’s head overseas. 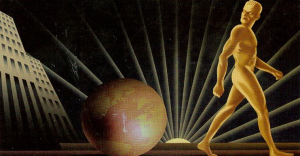 The needs of others do not incur debts to me. We owe society one thing and one thing only, non aggression, and they owe it to us as well. If they wish to pay this debt because they see the righteousness of it, then that is preferable, but if they will not, then the other side of that coin is force, which is a perfectly acceptable alternative to allowing them to continue in their bloodlust.

Luckily, we know that nobody need starve, that streets need not be paved with bodies, and that machetes are a tad dramatic. All that defensive force proposes is that non aggression drive up the opportunity costs of oppression, beyond the point where it beats production as a career choice.

We know that in the absence of the State, market alternatives to State institutions will appear spontaneously. The rubber hits the road where supply meets demand. Our entire philosophical platform relies on this simple truth. If most people will not listen to reason, if most people insist on using the State to do harm to others, then the State must be taken away from them without their consent. In its absence, they will find other ways of doing things, they will adapt, they will move on.