The Alternatives Expo describes itself as “an incubator of ideas and practices for living an alternative to the state-controlled, regimented life where distant monopoly cartels dictate your every decision”. For several years it has served to host speakers and events at the Free State Project’s Porcupine Freedom Festival, that the FSP would not itself host for whatever reason.

After my expulsion from the FSP last year, AltExpo offered to host me in a use of force debate, but they have since changed their tune. Since they obviously aren’t adverse to discussing use of force, and are a left leaning institution, I had assumed this had more to do with my recent barrage of attacks on various “left libertarians” over the last few months. That may have had something to do with it as it pertains to me specifically, but the issue has become bigger than that. As it turns out, the FSP is now deploying Department of Transportation style tactics to silence alternative outlets.

For years, AltExpo has done its own fundraising to have its own tents at PorcFest. This year, the FSP offered to let them use one of their tents, but the use of that tent came with certain conditions. Most notably, that none of their speakers could positively discuss use of force under any circumstances whatsoever. Not me, not Larken Rose, not anybody. This goes a long way in dispelling some of the other defamations the FSP has launched against me in an effort to make my expulsion look less like an ideological issue, and more of a personal one.

What follows are screenshots from the PorcFest Facebook group, from which I am banned. Andrew Criscione made some mention of my debate challenges, and AltExpo’s Nick Ford suggested that although I was personally not welcome, Andrew could stand in my stead and take up the use of force advocacy in a debate. This was quickly crushed by Liam Enael who appears to be acting in some official capacity for the FSP. 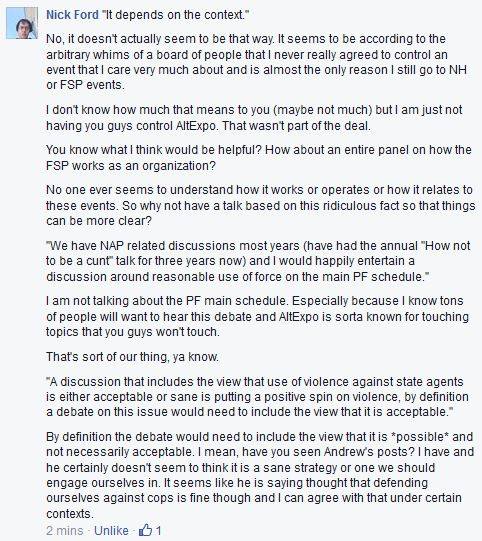 Liam Enael, it’s worth pointing out, also claims that I’m a racist and an NAP violator, and that drinking and driving, even if nobody is harmed, is an act of aggression. So what constitutes advocacy of “violence” in his book verses reality, might account for some of the confusion. By his math, any perceived increase in probability of accidental harm, regardless of outcome, constitutes aggression. Perhaps we should also ban all discussion of legalizing drugs, or repealing gun control laws, or increasing the blood alcohol concentration limits presently set by the NHTSA. 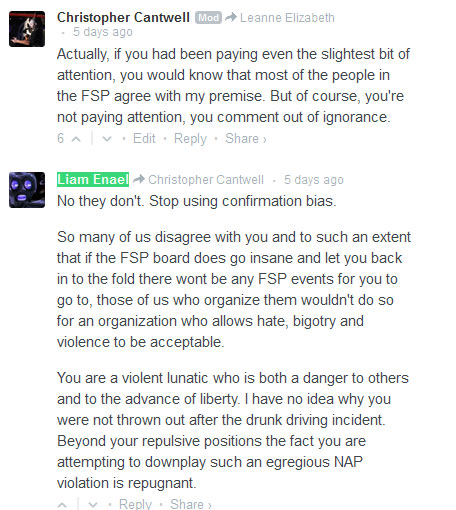 Maybe Liam Enael should check the latest poll in the FSP Facebook Group. Apparently out of nearly 100 votes, only him and one other person thought I should be banned for drinking and driving two years ago (Did I mention I’ve all but completely given up alcohol since then, and didn’t drink at all at PorcFest 2013?). 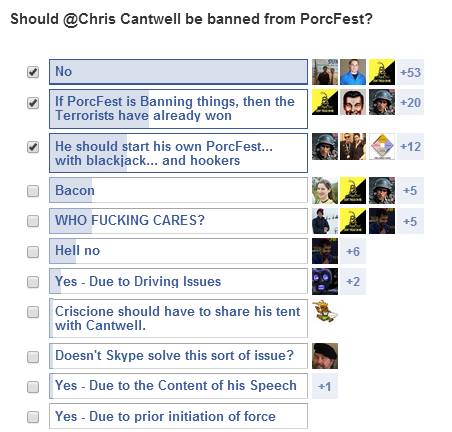 But again, this really isn’t about me anymore. The censorship of AltExpo should be all anybody needs to see that this is an ideological issue, and that other rumors, lies, and defamations against me are being used as distractions. Larken Rose has been a featured speaker at PorcFest and other libertarian events for several years. While he has not been banned, he has not been invited back for PorcFest 2014 either. If he were to show up anyway, AltExpo would not be welcome to host any discussion like the one he held last year titled “Why Speak of Violence?“. A discussion which the FSP’s President, Carla Gericke responded to with “I agree with you for the most part“.

A lot of people’s and institution’s reputations and credibility are riding on this debate. If all it takes to shut somebody up in this movement is a free tent, then Goldman Sachs, George Soros, or the Koch brothers can come in and buy out any libertarian institution they want. There is a very clear line to be drawn, and people can either stand with advocacy of defensive force and principled action, or pacifism and vandalism of the libertarian name. The bottom line is, you can’t have an honest discussion about libertarianism where the discussion of force is forbidden. Force is every bit as much a part of the non aggression principle as is private property. If you can’t defend something, you don’t own it. And no amount of distraction, dishonesty, defamation, censorship, or race baiting, is ever going to change that fact.