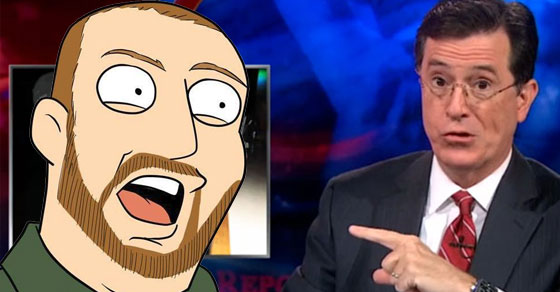 This article has been updated to include the full video of the Colbert Report segment I was on. See the original article below. Unsurprisingly, they didn’t use most of the video that was taken. Overall, yes, they tried to make us look ridiculous, but you know that before you sign a waiver for the Colbert Report. I think it came out pretty well.

The Meter Maids in Philly don’t much like me either…

Back when I first returned to New Hampshire I was interviewed by the Colbert Report. The show wasn’t supposed to be about me, but rather about Robin Hooding and chalking that was going on in Keene, and the antics between the Free Keene and Stop Free Keene groups. I was just tagging along, primarily because there had been some violence done to my friends here recently, and I wanted to watch their backs while open carrying.

The Colbert Report took notice of my gun, and asked to talk to me. It turns out they had heard about my article about Jerad and Amanda Miller, the couple in Vegas who shot it out with cops before taking their own lives just a few days prior. They ended up talking to me about that story, and my feelings about it.

I’ve just heard from a reader who was in the studio audience of tonight’s episode of the Colbert Report, that quote;

Hey Chris, I’m writing as a fan of your work from NYC. Just thought I should tell you that today, I was in the audience of The Colbert Report, and Stephen Colbert takes a shot at you in a bit that makes fun of the Free State Project as a whole. Did you know about this already?

I told him I knew they were here and that they interviewed me, but I did not know when or what they were airing.

It should be on tonight, if you want to check it out. I was so shocked when I first saw your face, it was like my two worlds combining at once! Lol! They basically just made fun of you guys for following around and harassing the parking meter people or something.

And they have footage of you shooting an American flag which I thought was a nice touch.

The reader then called into Free Talk Live (which I cohost every Wednesday) where he broke the news publicly.

The show has not yet aired, I don’t know any other details of the story or what they are going to air. It is on Comedy Central at 11:30pm EST. I will update this post with the video and commentary once Comedy Central has it on their site.

Until then, here’s the video of me shooting the flag that was mentioned…