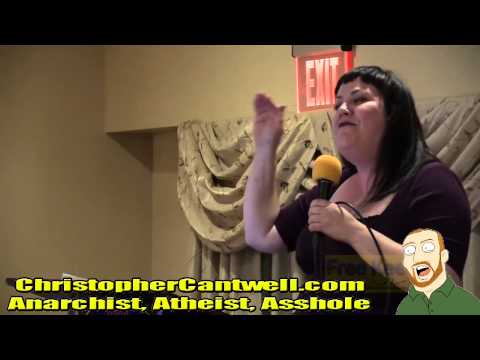 It’s been over a year since I was expelled from the Free State Project, and in October I finally got the opportunity to confront Carla Gericke, the President of the Free State Project at Keenevention. Believe it or not, I wasn’t going to say anything originally. This event was put on by Ian Freeman, and I didn’t want to hijack it to push my own agenda.

But as Carla spoke, I became enraged. She was invited to speak at this event as a key note speaker for the second year in a row, and rather than treat that honor with the respect that it deserved, she spat in our faces. Carla decided that this would be a great opportunity to speak down to us and denigrate the important work going on in Keene.

In case you’re not familiar, we’re not much for electoral politics here. The activity in Keene is almost entirely anti-State. We’re radicals and media whores, not politicians. We do in your face things that draw a lot of attention, which is why we’re always in the news. People who are trying to win elections, they don’t like this so much.

The Free State Project Inc. cannot technically endorse candidates, for fear of losing their 501c3 tax exempt status from the IRS. There’s a lot of money in that business though, and when you’ve got to pay the bar tabs for a woman like Carla Gericke, money is always in short supply. So tax forms be damned, the FSP has become a political organization. They cheer for any candidate “brave” enough to pose some lukewarm opposition to State expansion, so long as he has the money and establishment credentials to win, of course – and look upon radicals who would make changes in other ways with contempt.

As you’ll see in the video below, Carla compares Keene activism to the 60’s new left Trotskyite lunatics who are currently running the world into the ground. She goes so far as to imply Ian Freeman would somehow have been to blame, had the city council decided to turn Central Square into Guantanamo Bay while he was incarcerated. Victim blaming at its worst.

That’s when I stepped out to grab my smartphone and begin taking notes, she said so many ridiculous things it was becoming difficult to keep up.

Check out the video of her making these statements and my response below. You can see the entire speech and her response to me on the Free Keene YouTube channel.