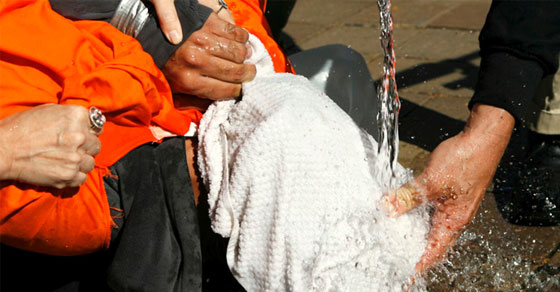 Usually when you talk to right wingers who support torture, wars, and other government violence, reason is met with belligerence. It’s like trying to talk to liberals about race, or economics, or gender. Every once in awhile though, you find someone who is willing to process information and come to a conclusion based on reason.

Such was the case with Scott from California, who called into Free Talk Live on Wednesday. He called in very supportive of “enhanced interrogations” and was unsure why everybody was freaking out about the torture report recently issued by the US Senate. He felt that the people who were tortured were threats to “our” national security, and the government had to do what was necessary to protect the homeland.

Funny thing though, conservatives tend to realize government isn’t good at a whole lot of things. They have this blind spot when it comes to cops and military, but as a general rule they know government can’t manage an economy or the details of people’s lives. When one applies that logic to what happens on a battlefield, or a prison, or any number of other situations, it’s hard not to realize the double standard is ridiculous.

Scott seemed to think the torture going on was mostly water boarding. He also seemed to think that waterboarding was not torture. When we explained to him that it was also forced rectal feeding, threatening to rape and murder family members, sleep deprivation, being forced to stand on broken legs, being kept in very small spaces, and many other horrific circumstances, he seemed to reconsider his position.

In the end, if you just assume the government is wrong 100% of the time, you won’t frequently be let down. It seemed like Scott understood this before the end of the call.