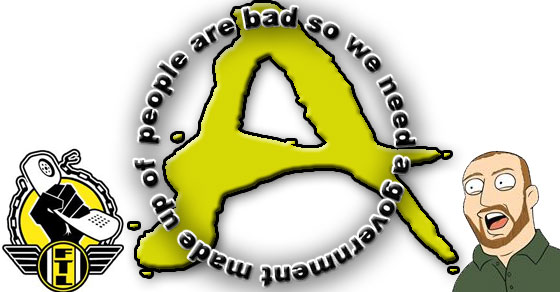 A Free Talk Live caller figured we needed a lot of government programs because people are stupid and evil. That caller has since changed his mind, both about government, and about people in general. It did however bring up the subject, are people stupid, evil, or both?

In the video below, we discuss the subject on Free Talk Live, but I want to riff on the subject a bit here.

I don’t think people are inherently evil. I don’t subscribe to the religious ideas of original sin or anything like that. There is nonetheless a lot of bad being done in the world, and if you want to stop that from happening it’s worth figuring out if people have a general tendency to behave badly, or if there is some other cause.

The Delineation Between Stupid & Evil

It is difficult to say that a person is doing evil, if they don’t know that what they are doing is wrong. State law has recognized this for a long time, hence the “insanity plea” in courts. A person who is unaware of, or incapable of understanding, the repercussions of their actions, is held to a different standard than someone who knowingly goes out to harm others.

This is the difference between a car accident, and vehicular homicide. If I accidentally run over some kid who runs across the street, I may or may not be held liable in some way for that death, depending on the circumstances, but it would likely be a civil matter, and not a prison sentence. If I purposely run somebody over with my car, I’m a murderer, and my life is going to be destroyed for it.

But can a lack of knowledge at some point equate to criminal negligence?

If one has the opportunity to learn how to drive, but chooses not to, and as an adult then gets in a car anyway and runs somebody over for not knowing how the brakes work, I’d say we’re dealing with a bad person. I have no obligation to learn medicine, but if I choose to not learn medicine, and then tell people I’m a doctor, and leave behind a path of dead and disabled patients, my ignorance creates victims.

That being the case, how does one not hold an economist to the same standards? Paul Krugman and other State propagandists who peddle their Keynesian economic vomit as though it were fact, are creating millions of victims. They are destroying immeasurable amounts of wealth and prosperity. Is Paul Krugman just ignorant of economics? Or is he evil?

It’s not as if Krugman and other Keynesians and communists and socialists have not had every opportunity to see the error of their ways. They are regularly confronted by Austrians and free market economists who point out their contradictions. The evidence of central economic planning’s failures is hundreds of millions of dead people, economic disaster, poverty, and war. This should be difficult for any decent human being to ignore, and I’d say anyone who does ignore it has crossed the line from ignorance to evil.

Stupidity – A Lack of Knowledge, or a Lack of Brain Power?

One of the disconnects we had on the show, I think, was how stupidity was being defined. Mark and Ian spoke about book smarts vs. street smarts, as did some callers. It is my premise, however, that stupidity is a lack of function in the brain itself.

IQ is not a question of what you’ve learned, it’s a question of your ability to think. There are plenty of criticisms of IQ, some more legitimate than others, but overall it is a pretty good measurement of a person’s intelligence. That’s why it is preferable to give IQ tests to young children, to have them tested before a lifetime of information has any chance to cloud the results. How well your brain functions, and what you have been taught by life and education, are two completely separate questions.

Most people have an IQ score of around 100. Speaking as someone who has a significantly higher IQ than this average, I can tell you that I look at most people as being pretty dull intellectually, and I don’t imagine I’m alone in this.

This is not a measurement of their value to society, just of cognitive function. People can do lots of valuable things without a high IQ. The world needs “ditch diggers”, people to do manual labor, clean, operate cash registers, cook food, data entry, an endless number of tasks. In all reality, jobs without a high requirement for intelligence, are in higher demand than jobs that do require intelligence.

I spoke about this at some length in the #ShirtStorm debacle. If you look at IQ scores across gender, a pattern develops. Men have a very high variance of IQs. Some men are very smart, most men are not. Women are more in the range of average, and don’t vary nearly as much. This makes perfect sense when you think about how society has organized itself.

A small number of men are geniuses, they figure out the complex questions for the rest of us. They explain things in simple terms, and write instructions that those at the lower end of the IQ spectrum can follow.

A large number of men are far from geniuses, but they can learn a function and do it over and over and over again. This is very useful in manufacturing, and labor in general. The genius figures out how to solve the problem, he creates a process for the worker to follow, the worker follows the process, and everybody benefits.

As a result of this variance in men, women on average have higher IQs than men, as a gender. This is because women are generally in the middle of the IQ spectrum. They are smarter than most men, but few if any women rival the intelligence of male genius. It makes sense if you think about it, given their traditional role as caregivers to children and support staff for the male work force. They have no need to be geniuses, but they need to be smarter than a ditch digger to handle the wide range of tasks associated with the raising of children.

Society can’t function without any of these people. So when we’re talking about intelligence we’re not talking about one’s value to society. Workers need leaders to follow. Leaders need workers to carry out tasks. Without someone to birth and raise the children, and to comfort and support these men, we would go extinct.

I would however say that the vast majority of people are simply incapable of weighing in on politics responsibly. To take matters as serious as economics and war, and place them in the hands of people who can scarcely operate a computer, is like handing atomic weapons and PCP to children. But that’s what democracy looks like…