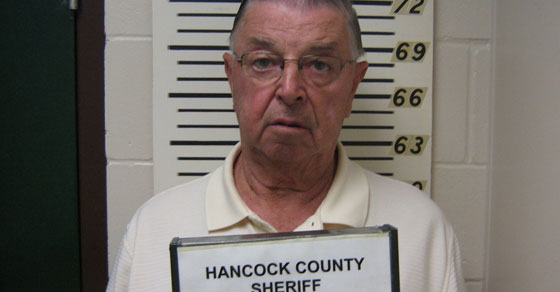 Henry Rayhons is a terrible person. As a Republican who has spent nine consecutive terms in the Iowa State legislature, he has voted for smoking bans, government intervention in marriage and employment, a ban on texting while driving, and surely countless other acts of government violence. He has supported increased State budgets across the board, he has opposed medical marijuana. This list could go on awhile, but suffice to say, I don’t like Henry Rayhons.

These are good reasons for the people of Iowa to vote him out or string him up – not reasons to convict him of rape. But that’s exactly what his Democrat daughter in law is trying to do to him.

Henry Rayhons stands accused of raping his wife, Donna Rayhons, for having sex with her at her request. The case against him is that his wife was not capable of consenting to sex, because she had dementia.

Now, don’t get me wrong. I understand why this is a touchy subject. If a staff member of the nursing home or some stranger was caught having sex with an Alzheimer’s patient, request or no request, there’s serious cause for concern. Simultaneously, I recognize that a husband has no more a right to penetrate a woman without her consent, than a complete stranger does.

So where to draw the line?

I think most of us would recognize the problem with a stranger or caregiver having sex with an Alzheimer’s patient. If this woman is not all there mentally, then even if she asked for sex, we would tend to conclude that this person had taken advantage of her impaired mental state. Even in the absence of legal consequences, this person would be shunned from polite society, and treated as the worst sort of criminal.

I would make the case that this is an unreasonable standard. The body is the property of the person who inhabits it. Rape is essentially the non-consensual taking of one’s most valuable property – the body. Since the property is the body itself, it is an act of violence against the person as well. These circumstances combined with society’s mixed feelings about sex itself, leads us to rightly see rape as amongst the most heinous of crimes, but let’s not get confused, this is a property rights issue like everything else.

Familiarity does not justify rape. No more than it justifies theft or kidnapping. However, when one finds themselves impaired by a disease like Alzheimer’s, society tends to recognize that the family of the sick person gets to make certain decisions for them. Decisions like how to spend money, where they will live, even whether or not to keep them on life support or receive other potentially life saving medical treatments.

While we may rightly regard the stranger who takes advantaged of an Alzheimer’s patient sexually as a rapist, we would also regard that person as a thief if they were to spend the patient’s money, even if they were given permission to do so. We would recognize them as a kidnapper if they relocated the patient without the patient’s consent. Meanwhile, we recognize that a husband can commit his impaired wife to a nursing home, without her consent. We recognize that he can make decisions about how her money is spent, without her consent. Restraining them from walking into traffic, depriving them of weapons, restricting their access to money, preventing them from driving, the list goes on. When a person loses control of their faculties, those closest to them get to make a lot of decisions on their behalf. We generally understand that this is in the best interests of the impaired person, and so we don’t call the family members thieves, or kidnappers.

So why would we call them rapists?

Donna Rayhons has never complained about her husband having sex with her. By all accounts, she was quite literally asking for it. Henry Rayhons said his wife on occasion asked for sex by saying, “Shall we play a little bit?” He said he “never touched her when she didn’t want it, and I only tried to fulfill her need when she asked for it.” There is no allegation that he ever forced her. The only issue here is whether or not she was capable of giving consent.

Alzheimer’s patients don’t necessarily lose interest in sex. Human sexual desire does not disappear just because we lose control of our bowels and forget our children’s names. A 2007 study published in the New England Journal of Medicine said 53 percent of people 65 to 74 years old and 26 percent of those 75 to 85 reported being sexually active. Half of those active in the older group reported having sex two to three times a month. More than 40 million people are 65 and older in the United States, according to the Census Bureau, and according to the Alzheimer’s Association, about 5 million of them currently suffer from Alzheimer’s disease, the most common form of dementia. Baby boomers, those born from 1946 to 1964, began moving into that group in 2011. The generation that burned their bras and came up with the birth control pill, is not about to give up on their favorite pastime just because mental decay is setting in.

The issue was only raised after Donna Rayhons’ daughters from a previous marriage, Linda Dunshee, 54, and Suzan Brunes, 52, brought it up. They sought to have their mother committed to the nursing home against her will, and against the will of her husband Henry. After they succeeded in doing so, they then took issue with them having sex.

On May 14, Brunes and Dunshee met with John Brady, a family physician caring for Donna Rayhons at the home. They discussed a new plan to limit outside activities, including outings with her husband. Brady initialed a one-page document listing the restrictions and including a question about whether Donna Rayhons was mentally able to consent to “any sexual activity.” Brady wrote, “No.”

Per the Des Moines Register;

The plan and the sexual decision were based on Donna Rayhons faring poorly on a standardized cognitive test called the Brief Interview for Mental Status. The BIMS is used to identify nursing home residents with dementia for the federal Centers for Medicare and Medicaid Services, which regulates nursing homes.

Test subjects score from 0 to 15 on a series of memory questions such as what year, month and day it is. They’re given the words “sock,” “blue,” and “bed” and asked to repeat them. Donna Rayhons scored 2 on a BIMS given her on April 3 and zero on a May 13 test.

Using the BIMS to gauge a dementia sufferer’s ability to make sexual and other decisions is a mistake made by many long-term care facilities, said Susan Wehry, a geriatric psychiatrist and commissioner of the Vermont state department that investigates sexual and other abuse in nursing homes.

Douglas Wornell, a Tacoma, Wash., geriatric psychiatrist and author of the 2013 book “Sexuality and Dementia,” said it was “naïve” to conclude that Donna Rayhons’ inability to recall words meant she couldn’t decide whether she wanted sex, which is “along the order of knowing you want some food.”

Henry Rayhons was presented with the document saying his wife couldn’t make decisions about sex in a meeting with her daughters and Concord Care staff on May 15. He said he understood, and “it wouldn’t be any problem,” Brunes told a state investigator.

A few days later, Brunes and a Concord Care social worker discussed moving Donna Rayhons into a room with a roommate she could interact with, according to the log the daughters kept. The home needed her room for a male resident, and Brunes thought having a roommate might prevent “potential sexual acts,” according to the log.

Donna Rayhons moved into Room 12 North on Friday, May 23. She wasn’t happy about it, according to the daughters’ log. She wept and accused Brunes of not liking her husband.

After this move took place, Henry visited his wife again. The wife’s roommate said he closed a privacy curtain, and she heard “sexual noises”. A statement she later retracted saying that all she actually heard was whispering.

A flurry of calls between staff and Donna Rayhons’ daughters followed. Around 10:30 p.m., Dunshee asked that police be called. Donna’s panties and bedding were retrieved from a hamper. She was taken to a hospital and examined by doctors who determined there was “no bruising or tearing of her vaginal skin,” and found “no evidence of seminal fluid or DNA other than hers on swabs of her mouth and vagina.”

Still no complaints from Donna.

Henry was questioned by police investigators, and he said he didn’t recall having sex with her on that day. He did however seem to imply it was possible, suggesting he had continued to have sex with her even after being told she was incapable of granting consent.

Donna died on August 7th, never having made any complaint against her husband. Henry attended her funeral on August 12th. Three days later, he was arrested for raping her.