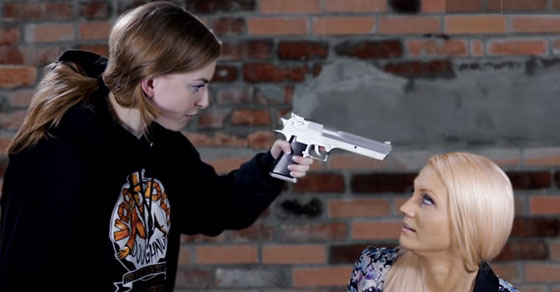 About a year ago, Cathy Reisenwitz and “Libertarian Girl” produced a video titled “How Not To Talk To People About Liberty“. I figured this piece of shit had been retired to the dustbin of left libertarianism’s history, along with the social justice warrior ditz who created it, until it was once again shared by liberty.me on Facebook last night.

The video goes through a number of points to demonstrate how the actors look down upon various factions of the libertarian movement, and illustrating their opinion that we should all be State negotiating social justice warriors instead. So let’s go through those points and see what’s wrong with them…

Cathy puts on a mustache and a hat that says “TITS” on it, and says “I don’t have a restaurant, but if I did, I should be able to discriminate against whoever I damn well please”.

I suppose this goes back to Cathy’s assertion that “American libertarians are super racist” just because we support people’s right to say what, and associate with whom, they see fit. In case you haven’t turned on a television or picked up a newspaper in the last 30 years, there’s a war being waged by the left against anybody who doesn’t care to associate with, or holds any negative opinions of, certain groups of people.

So when a court rules that the government can threaten violence against a family owned bakery for refusing to bake cakes for gay weddings, actual libertarians get pretty pissed off. We also tend to join in the disgust that non-libertarians have, for the people who cheer for this kind of deplorable violence and pass it off as “tolerance”.

So actually, if you want to talk to people about liberty, yes you should tell people that a restaurant owner should be free to discriminate against anyone they damn well please. Perhaps you don’t do it as a hideous woman with a mustache though…

Again with a fake mustache, “Libertarian Girl” says “Girls just aren’t logical, that’s why there are no girl libertarians”

To the fake mustache thing, can we all try to imagine what these women would say if a white man did a video like this in black face? They would be calling it racist. There’s a common theme with feminists like Cathy, and that’s misandry. Putting on men’s clothing and a fake mustache and trying to sound stupid is her man-hate bleeding through into her content.

Next, there are a lot of female libertarians. They are vastly outnumbered by men, but they exist.

Is the fact that they are so outnumbered due to females being “just not logical”? I don’t know if it’s genetically inherent in the gender or not, but if we look at the demographics, and a little bit of history, we can see a pattern developing. Women tend to vote left, which is anything but logical. Women have been targeted by the Democratic party for many years now. They have been told that anyone who opposes being forced to pay for their birth control and infanticide is waging a “war on women”. If they buy this crap, and in vast numbers, they do, then they are not logical, and terribly unlikely to become libertarians. Your incessant whining about liberal issues only further illustrates the point.

It’s time to face reality about gender and IQ. Libertarians tend to be libertarians because they are smarter than people who are dumb enough to run to the State for answers. Most people will never be libertarians, because libertarians try to give real solutions to problems. This tends to be more difficult to understand than the empty promises of politicians. If Barack Obama says “Government will solve this problem” and our answer is an economics lesson, Barack Obama will win 98 out of 100 times.

The people who do understand what we’re saying will tend to be of above average intelligence, which largely excludes women from the demographic. Women on average have higher IQ’s than men, because men are smarter, and dumber, than women. Most men are basically built to be ditch diggers and soldiers, they don’t have very high IQ’s. A minority of men are built to be thinkers and leaders, and are blessed with superior intelligence. Women are largely built to be mothers and housewives, support staff to leader and ditch digger alike- they have IQ’s in the middle of the spectrum.

So while I appreciate the contributions of ditch diggers and mothers, I don’t spend a great deal of time wondering why they haven’t joined think tanks and rejected a lifetime of State indoctrination. Average and less than average intelligence is not conducive to figuring out the answers to all mankind’s problems. That’s why democracy is a bad idea – stupid people end up ruling the world, because they are, and always will be the majority.

LG and Cathy go back and forth calling people statist

If I had the time, I’d make a parody video where I wore a blonde wig with fake tits, and I’d go back and forth with someone else calling people racist to point out the hypocrisy of this ditzy duo.

If one supports the State, or even just fails to oppose it, they are a statist. Nothing wrong with calling a spade a spade. “Statist” is, and should be considered, the worst insult one can pay to a person. Shaming people for bad behavior, while perhaps not the best of introductions, is as libertarian as gun ownership.

On the other hand, there’s plenty wrong with calling Ron Paul, Walter Block, and Lew Rockwell “super racist” because that assertion is completely unsupported by fact.

If by reform you mean “make less of” then one might say you were working towards a more libertarian society. Unfortunately, when left libertarians talk about reforming entitlements, this isn’t usually what they mean. Instead, you usually end up with lunacy like Matt Zwolinski’s “Libertarian Case for a Basic Income” which just plain gives cash to whoever asks for it.

They might make the case that this would cost less, but Democrats said the same thing about Obamacare. Making government handouts more appealing and less complicated will only increase the demand for them. It’s not as if the welfare State reaches a point of satisfaction and ceases to grow. If you give people a basic income guarantee, the next step will simply be to redefine “basic” to increase the amount paid. It’s as predictable as the plot of “24”.

White People Can’t Be Discriminated Against

In keeping with her “check your privilege” hatred of all things white and male, Cathy again dons male clothing, this time using her mustache as a unibrow. She says “I just feel like nobody is paying attention to the way white dudes are discriminated against, man”.

Thanks to people like Cathy, being a white male in America is not exactly this pinnacle of privilege they would make it out to be. Try to form a white student union, or hold a conference on men’s rights, and you will be bombarded with death threats. Anything pro-white is considered racist. Anything pro-male, is considered misogynist. There’s an ever increasing effort to make anything labeled racist or misogynist illegal, and yeah, we’re pretty pissed off about that.

Demonizing “conspiracy theories” is hardly uncommon in libertarian circles. Neither is completely miscategorizing what “conspiracy theorists” are saying. So our team of estrogen enriched entertainers are hardly alone on this one.

While claiming that conspiracy theories are hurting teh moobment, these idiots actually prove the exact opposite. The reason people feel so strongly about conspiracy theories, for or against, is because programs like Alex Jones bring more people into this movement than anybody would like to give them credit for.

If you want to undermine the State, I can hardly think of a better way of doing that than convincing millions of people that 9/11 was a lie.

LG holds a gun and a bow, bragging about the MRE’s she bought off the Alex Jones show.

Go back to sleep citizen, Zwolinksi’s guaranteed income is right around the corner. The government will take care of you. Stop listening to alternative theories about what the government tells you. There is no chance that the Federal Reserve note will crash, or that America’s belligerent foreign policy will have disastrous consequences here at home.

The Government Is Not Violence

Cathy points a gun at LG, saying “This is what the government is, this is what it does to people”

In Summary, The Entire Thing Is Pro State Propaganda

Just like everything else I’ve seen come out of Cathy, this video was pro-State. It attacks libertarianism at its core, and chips away at all its factions, while replacing it with social justice warrior nonsense. It is anti-white, it is anti-male, it provides no alternatives or solutions, it does nothing to explain or advance the philosophy. All it did was attack libertarians and libertarian ideas.

If you think that’s helpful to advancing liberty, then you’ve been duped by an intentional leftist effort to undermine the work we do.

Please bookmark this link and post it in the comments wherever you see someone sharing this video.