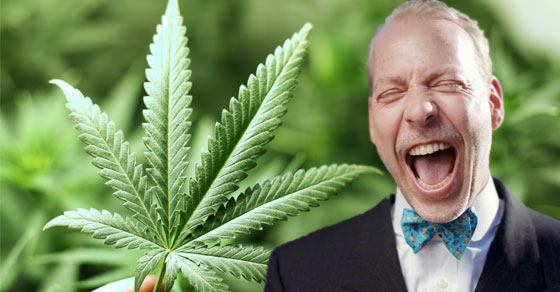 A number of people have contacted me about a piece recently penned by Jeffrey Tucker on marijuana. Titled “Pot is Gross” at LifeZette.com, Jeff expresses his aesthetic distaste for the drug, and for characteristics common amongst its users.

My readers brought it to my attention repeatedly, under the assumption that I would gleefully attack him for his stance, as I have in a number of other cases. I have to say though, that I think this is his finest work since his departure from the Mises Institute. I don’t smoke pot, I don’t like pot, and the libertarian obsession with marijuana, and drugs in general, is a huge detriment to our goals, in my opinion.

Living in New Hampshire, and surrounded by libertarian activists in much of my social activity, I am perpetually exposed to pot. For many of them, being stoned is a way of life – even as they look down their noses at alcohol or tobacco use. Potheads are the snobs of the drug culture.

They tout its mind expanding powers, as they sit dimly rehashing hippie nonsense as though it were profound and spontaneous intellectual discovery. Vague references to “quantum physics” fill in the blanks in discussions of topics they clearly do not understand. They say how it is so much better than alcohol and tobacco because it is “natural” seeming to forget that “natural” plants have seeds. The marijuana being smoked by today’s potheads more resembles a Monsanto bioweapon than the dull colored “regs” I used to smoke as a teenager. It’s all a conspiracy by the alcohol industry, or was it the paper industry, or the timber industry, let’s just blame the “corporations, maaaan”. Oh, how much better the world would be, they say, if everybody smoked pot, we could all hold hands like a bunch of faggots and sing fuckin Kumbaya. Pot will end the wars, pot will end the violence, pot will end the State itself.

If only their delusions were true…

For many pothead free staters, the discovery of a place and social circle where their drug of choice is not only tolerated but celebrated, is the defining characteristic of liberty. It matters not that the federal government is an existential and ever expanding threat to the safety and happiness of all mankind. All that matters is pot, promiscuity, and gay marriage.

Libertarians cheered enthusiastically as marijuana was legalized in Washington and Colorado, even as it was heavily taxed and became a huge revenue source for state governments. Colorado followed up by passing sweeping gun control legislation as well. Congratulations, hippie, your drug habit just bought the cops more bullets to put through your skulls when you disobey some other edict of the legislature. No doubt there was a great overlap between those libertarians, and the ones who celebrated the Supreme Court ramming gay marriage down the throats of all 50 states, by changing their Facebook profile photos to rainbows.

This of course lends itself to the rampant anti-intellectualism in the movement, a thing Tucker himself stands guilty of promoting. No sense in looking over demographics in crime statistics when it’s so much easier to spark a doobie and shout “fuck the police!” The hyperinclusive passivity of the hippie mindset refuses to see the world as it is. Better to burn down the symptoms of anxiety with pot, than to address the source of the problem. When facts come into conflict with perceptions, the facts are deemed racist and shrugged off without argument. Far better to be an ignorant fool, than a buzzkill.

I agree with Jeff, that of course the war on drugs is a fit of insanity. It is a frivolous overreach of government power at any level, and wholly outside the constitutional bounds of the federal government, as prominently evidenced by the 18th and 21st amendments. I also agree that without it, marijuana would largely go out of style. Pot is seen today as rebellious, as though setting plants on fire and lowering one’s cognitive capacity were somehow harmful to the State.

I view pot the same way I view any other vice. People who enjoy it, ought to be free to pursue it. They ought to do so however, the same way they treat alcohol or prostitution. As a vice, not a virtue.

Pot smells awful, the health claims purported by its advocates are dubious at best, and its users are often dim witted cowards and weaklings who couldn’t punch their way out of a wet paper bag. I certainly will not be counting on stoners to outthink the State, much less pick up rifles and do what is necessary when the revolution comes.

It ought to go without saying that not all pot smokers fit the stereotypes outlined here, and those people shouldn’t take offense. If you’re a pot smoker who manages to be productive and not a left wing hippie retard, good for you. And of course, Tucker himself displays many traits of the aforementioned hippie retards himself, without smoking marijuana at all.

Still though, pot is just a drug. It is not a thing to celebrate, it is nothing but a vice. I’ve got some vices of my own, but you don’t see me touting them as virtuous paths to higher planes of existence. If you enjoy a drink, a toke, or a pill, I don’t hold it against you, but perhaps it is time to stop with the ridiculous memes about pot curing cancer and saving mankind from his inherent wickedness. We will find answers in clear, reasoned thinking, in logic, and evidence. Not at the bottoms of bottles or baggies.