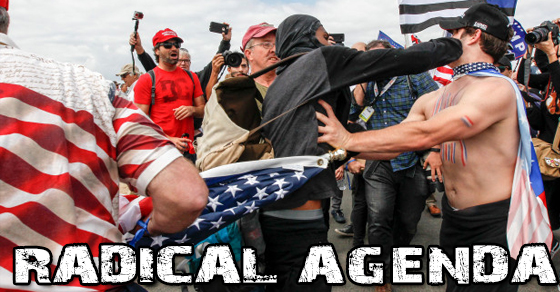 Imagine if you will, a funeral procession. Limousines and black clad people of all ages, exchanging memories of the dearly departed. Reason was his name, he left no children behind.

Half the people in the funeral parlor are half drunk off their pocket flasks, and outside there are a bunch of people who hated Reason so much, that they wouldn’t even permit a proper burial. They want him burned and desecrated, and his name destroyed for an eternity, and they’ll hurt innocent people to get what they want.

If you guessed this was a metaphor for something going on right now, you’re onto something. I got a message from a listener over the weekend which read “After being swarmed by antifa in New Haven I now understand why you refuse to go anywhere that won’t let you carry”. He further informed me that Augustus Invictus had to cancel his speech due to security concerns.

Connecticut, you might recall is home to one Sandy Hook Elementary School, the scene of a mass shooting that inspired new gun control laws to pass throughout the country. Suffice to say, they are not an open carry state, and they certainly do not reciprocate a New Hampshire Pistol/Revolver License.

You know where else you’re not allowed to carry a gun? Germany, where the G20 meetings were recently held. Outside, Luke Rudkoswki and another independent journalist were accused of being Nazis, and assaulted on the streets while police did nothing to stop it.

If anybody knows of a way to handle these problems verbally, I’m all ears. I’m starting to think the time for talk might be drawing to a close though. What discussion can I have with anyone, while my life is left in the hands of negroes and homosexuals who have already proven willing to illegally assault me, on camera, in front of hundreds of witnesses? Should I trust the judgement of such savages, for the reward of postponing a conflict? Call in and convince me that Western civilization is not on the brink of mass civil unrest, if not open warfare, at 747-234-2254, or RadicalAgenda on Skype.

So join us, this and every Monday, as well as Wednesdays and Fridays from 5-7pm Eastern for another exciting episode of the Radical Agenda. It’s a show about common sense extremism where we talk about radical, crazy, off the wall things like being disarmed by your government, only to be assaulted by the criminals such laws enable.

I’m still banned from streaming to YouTube. Catch the live video stream on UStream. Listen live on the TuneIn app! Got Roku? We’re on there too! Or add the raw stream to your favorite streaming app! Get the podcast on iTunes, Stitcher, Google Play, Roku, RSS, or RadicalAgenda.com.

I keep the lights on here by selling premium memberships, as well as bumper stickers and shirts. I also solicit donations, and encourage you to shop through my affiliate links. Without that support, this show will cease to exist.