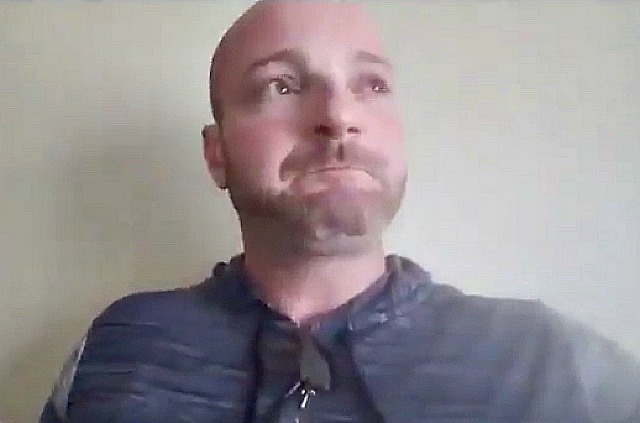 In the wake of the Unite the Right rally in Charlottesville this past August, I live streamed a statement about the event to Facebook, which I later uploaded to my YouTube channel. Both platforms have been shut down by the Jews who run them, but not before the video went viral, earning me the nickname “The Crying Nazi”.

To reiterate for those who are unfamiliar, I was scheduled to be a headliner for the controversial event on August 12th. That never ended up happening, because AntiFa terrorists successfully managed to violently disrupt the event with the help of local authorities.

On the night of Friday, August 11th, I took part in a torchlit march on the University of Virginia campus. This ended in a brawl started by AntiFa terrorists, despite our efforts to coordinate with law enforcement to keep the groups separated. I was compelled to pepper spray two violent criminals during the melee, and was later pepper sprayed myself as I attempted to disarm a woman wielding an expandable baton.

On Saturday, August 12th, I was pepper sprayed without provocation as I walked to Lee Park for the event through a gauntlet of leftist rioters who hurled rocks, bottles, urine, feces, pepper spray, fists, clubs, and god only knows what else at us. Just as my vision was recovering, I was told police had declared an unlawful assembly. This despite our having applied for a permit, and won a federal court case against the city for trying to alter the permit.

Twice in two days I had my first amendment rights violated by violent criminals, seemingly with the full cooperation of law enforcement. Twice in two days I was assaulted. So you can imagine my shock, when my travel companion told me she heard there was a warrant out for my arrest, announced on the live stream of a transgender lunatic who had been stalking me.

I called the Charlottesville police department to see if they could confirm or deny the warrant, but they would not do so over the phone. They only said I had to go to a magistrate to check, but I wasn’t sure what that entailed, and the city was in a state of emergency. I emailed a cop from my home city and asked him to look into it for me, and while I waited for a response I live streamed a video statement to Facebook. During the stream, I found it difficult to fight back tears, and continued my stream anyway.

I find it hilarious that the same people who mock me for getting emotional after such an intense two days, would have hailed me as a hero if I was crying because a public restroom didn’t affirm my gender identity. If it wasn’t for double standards, leftists would have no standards at all. I was assaulted repeatedly and had my civil rights violated for little reason other than the color of my skin, and now I had bogus felony charges being pressed against me. I correctly predicted that no matter how bogus these charges were, I would be in for a very long struggle dealing with a legal system that had long ago forgotten about the presumption of innocence, while the Jew media portrayed law abiding demonstrators who applied for a permit and won a court case as terrorists for being attacked by communists.

I’m not a Nazi, I’ve never said I was, and people who call me a Nazi are liars. More importantly, I didn’t cry because I was afraid of jail. I was brought to tears because the events of August 11th and 12th confirmed my worst fears. America has become a place where liars thrive, and the truth is criminalized. A place where speech is considered violence, and violence is considered speech. A place where law is considered tyranny, and tyranny is considered law. Gone are the days when an individual was protected against the majority, and now we live in a place where even the President of the United States has his speech dictated to him by mobs of violent, dishonest, lawbreaking communist agitators.

If that is not worth crying about, then I don’t know what is.