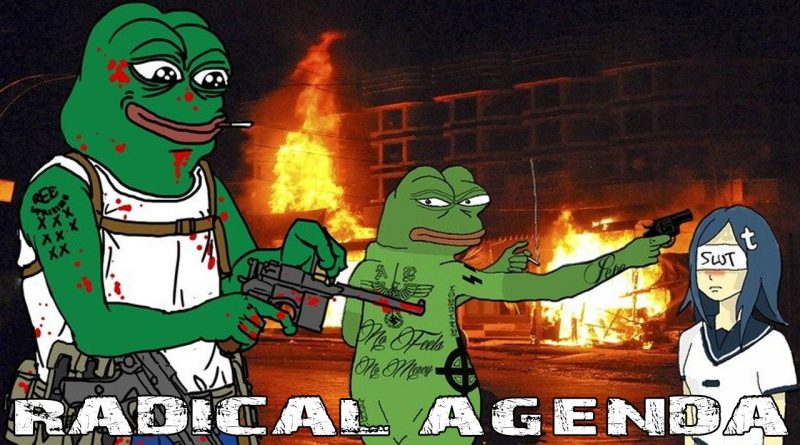 Here at the Radical Agenda, we appreciate a good troll job. I’ve basically made it a full time gig myself, tricking the Jew media into promoting my show for free. Donald Trump would not be president if he hadn’t mastered the art of getting on the enemy’s nerves. If you think about it, trolling has become the guerrilla warfare of media and politics.

Wikipedia describes guerrilla warfare as “a form of irregular warfare in which a small group of combatants, such as paramilitary personnel, armed civilians, or irregulars, use military tactics including ambushes, sabotage, raids, petty warfare, hit-and-run tactics, and mobility to fight a larger and less-mobile traditional military.”

We don’t have major newspapers, TV networks, financial institutions, or political parties to crush our enemies by overwhelming force. Instead, we make ourselves antifragile. We use the energy, size, and arrogance of our assailants to our advantage.

People in our movement criticize me for talking to the media. They tell me the lugenpresse is just going to smear me, so I shouldn’t help them by providing commentary. I rather look at it like tapping my own chin as an invitation for a drunk rival to swing on me, so I can lay his stupid ass out, legally.

Vice News thought they were helping antifa by making me look like a monster, but now antifa is about to start funding the alt right. That never would have happened if the prosecutor wasn’t blinded by media hysteria. If he had done his job, the tranny would be facing perjury charges, I would have been out of that jail in no time, and this would have been a mere blip on the radar, like Pikeville, or Auburn.

From Mein Kampf; (Emphasis and echos mine)

It required the whole bottomless falsehood of the Jews and their Marxist fighting organization to lay the blame for the collapse on that very man who alone, with superhuman energy and will power, tried to prevent the catastrophe he foresaw and save the nation from its time of deepest humiliation and disgrace. By branding Ludendorff as guilty for the loss of the World War (((they))) took the weapon of moral right from the one dangerous accuser who could have risen against the (((traitors))) to the fatherland. In this (((they))) proceeded on the sound principle that the magnitude of a lie always contains a certain factor of credibility, since the great masses of the people in the very bottom of their hearts tend to be corrupted rather than consciously and purposely evil, and that, therefore, in view of the primitive simplicity of their minds they more easily fall a victim to a big lie than to a little one, since they themselves lie in little things, but would be ashamed of lies that were too big. Such a falsehood will never enter their heads and they will not be able to believe in the possibility of such monstrous effrontery and infamous misrepresentation in others; yes, even when enlightened on the subject, they will long doubt and waver, and continue to accept at least one of these causes as true. Therefore, something of even the most insolent lie will always remain and stick – a fact which all the great lie-virtuosi and lying-clubs in this world know only too well and also make the most treacherous use of.

The foremost connoisseurs of this truth regarding the possibilities in the use of falsehood and slander have always been the Jews; for after all, their whole existence is based on one single great lie, to wit, that they are a religious community while actually they are a race – and what a race! One of the greatest minds of humanity has nailed them forever as such in an eternally correct phrase of fundamental truth: he called them ‘the great masters of the lie.’ And anyone who does not recognize this or does not want to believe it will never in this world be able to help the truth to victory.

Even on a podcast marketed as fictional entertainment, I can’t do the big lie thing. That’s kike shit. We just have fun, and let our enemies do the rest.

But every once in awhile, the big lie can be used against the biggest liars of all. Twitter user @pixelatedboat tweeted out a phony excerpt from the much talked about book, “Fire and Fury: Inside the Trump White House” by Michael Wolff (My real copy should arrive tomorrow). In it, he made the outrageous claim that;

On his first night in the White House, President Trump complained that the TV in his bedroom was broken, because it didn’t have “the gorilla channel”. Trump seemed to be under the impression that a TV channel existed that screened nothing but gorilla-based content, 24 hours a day.

To appease Trump, White House staff compiled a number of gorilla documentaries into a makeshift gorilla channel, broadcast into Trump’s bedroom from a hastily-constructed transmission tower on the South Lawn. However, Trump was unhappy with the channel they had created, moaning that it was “boring” because “the gorillas aren’t fighting”.

Staff edited out all the parts of the documentaries where gorillas weren’t hitting each other, and at last the president was satisfied. “On some days he’ll watch the gorilla channel for 17 hours straight,” an insider told me. “He kneels in front of the TV, with his face about four inches from the screen, and says encouraging things to the gorillas, like ‘the way you hit that other gorilla was good’. I think he thinks the gorillas can hear him.”

Despite the fact that @pixelatedboat is a cartoonist who describes himself as a “Prince of lies,” liberals actually believed this story. Not the least of which was the official leader of the “Resistance” Scott Dworkin.

Rather than accept their embarrassing defeat, and get a sense of humor, some of these gluttons for punishment tried to turn their own stupidity against the President.

Pat Race, aka @alaskarobotics tweeted “The Gorilla Channel Test: If enough people find it plausible that the president has spent multiple hours hunched in front of a television, shouting instructions to gorilla fight combatants, maybe it’s time for a new president. I propose this amendment to the constitution.”

I’ve got a better idea. How about we require IQ tests to vote, so people who fall for this nonsense don’t get a say in who controls the nukes?

Megan Farokhmanesh at The Verge writes;

The problem with our current administration is that the circus described in Ward’s version is not so far off from rumors of piss tapes, reports of a president who eats McDonalds for fear of being poisoned, and public outrageous antics that run from ridiculous nicknames to taunting world leaders about nuclear war. We also know Trump spends a lot of time watching and reacting to TV. With such actual, publicly observable misbehavior happening every day, it’s easier to see why some people would take the gorilla story as real — especially people already inclined to believe the worst of Trump.

Shut up, Meg. The problem with the current administration is that he gave his daughter to a Jew, we don’t have a wall across the southern border, and our military is still engaging in the same Jewish foreign policy of the last two administrations.

If you people are willing to believe that the President of the United States spends 17 hours a day encouraging TV gorillas to beat each other up, no wonder you believe a bunch of people who applied for a permit to hold a demonstration, were the same ones who started a riot to shut it down.

424-3-GO-NAZI or Radical Agenda on Skype if you would like to be on pogrom.

Join us, this and every Monday, as well as Wednesdays and Fridays from 5-7pm Eastern for another exciting episode of the Radical Agenda. It’s a show about common sense extremism where we talk about radical, crazy, off the wall things like guerrilla information warfare.

Watch live and chat on GabTV or PewTube, or listen live on the Radical Radio Network.