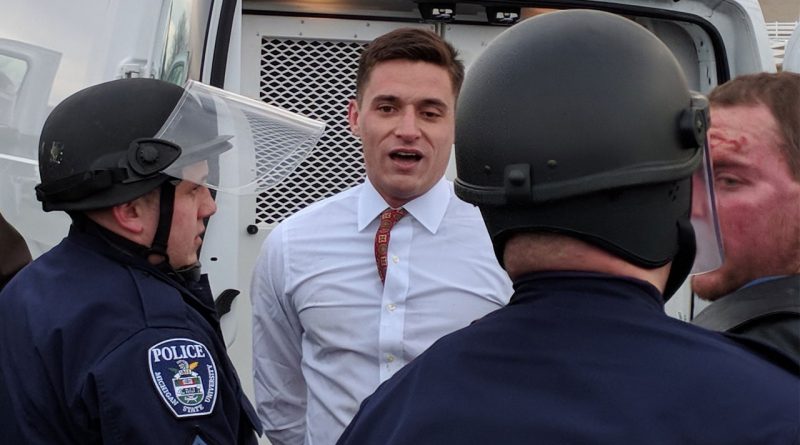 UPDATE: Greg was released from custody pending investigation, but without charges. Those charges have now been pressed. He is charged with a felony resisting charge. Oddly, no other charges are attached, which begs the question “Why was he being arrested when he allegedly resisted?”

NPI Director of Operations Gregory Conte was unjustly arrested after being attacked by antifa at Richard Spencer’s Michigan State event.

You might remember Greg Conte from an epic interview he conducted with ABC7 that went viral earlier this year. Also known as Greg Ritter before he got doxed, Greg coolly smoked a cigar while explaining his situation to a brown skinned female reporter, in the wake of being fired from his job at a Catholic school over his political views.

“You should’ve stood up for me,” said Conte. “I’ve expressed a slightly out of normal position political opinion. You’re going to throw me by the wayside,” said Conte.

Greg has also aided in securing the safety of your humble correspondent at one of my court dates. He can be seen getting between me and some dimwit washed up gangbanger in this news video as I left the courthouse on January 31st.

Gregory Conte is the Director of Operations at the National Policy Institute and host of Alt Right Politics.

The National Policy Institute is presided over by Richard Spencer, the best-known Alt-Right and White identitarian figure in the world. Richard spoke at Michigan State University on Monday, March 5, after the event organizer overcame a legal challenge by the University to deny he and Spencer their First Amendment Rights.

Still, hostile “antifa” opposition to Spencer’s speech was high. As Greg attempted to lead a group of Spencer supporters through the violent crowd, he was attacked. In the course of defending himself he was arrested.

At this stage he is being held in jail. We do not know with what he is charged or the amount of his bail–that information will be discussed tomorrow at his arraignment.

In the meantime we are beginning this fund to support his bail and his potential legal defense.

Greg is a patriot of the highest and most loyal order. Help us help him.