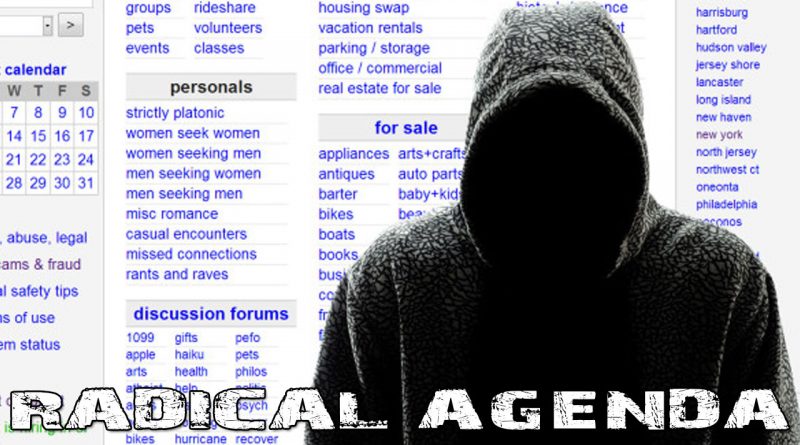 Previously on the Radical Agenda we briefly touched on the topic of websites being held liable for user posted content. Right now, I am not criminally liable for something you post in the comments section here. The law says you are responsible for what you post, and I don’t have any particular obligation to police my users’ content.

On Wednesday the US Senate passed a bill by a vote of 98-2, which would alter that legal protection. The Allow States and Victims to Fight Online Sex Trafficking Act, or FOSTA, makes websites criminally liable for content that its users post which involve prostitution ads and sex-trafficking. Since my comments section isn’t exactly a marketplace for prostitutes, it won’t affect me, yet. It does however mark an important delineation in the timeline of our decline as a free society.

No. This is not some lolbertarian defense of prostitution.

A lot of the problems we have with social media these days are not entirely due to the ideological makeup of the people at these companies. Yes, that is a huge part of it, but the other part is that “hate speech” laws in other countries impact the policy of global corporations like Facebook and Twitter. As bad as the censorship has gotten here in the United States, it is far worse across the pond.

The European Court of Human Rights in 2015 held an Estonian news portal liable for hate speech in comments on its website. At the time, the court emphasized that its judgment should apply only to professional news sites that invite comments on their stories, and not to other online forums such as discussion boards, bulletin boards and social media sites. That changed recently in Germany, where sites like Facebook now have to promptly remove so called “hate speech” promptly or face fines of up to 50 million Euros.

In the United States, Section 230 of the Communications Decency Act protects websites from this kind of liability, with the notable exception of intellectual property. Considering the popularity of FOSTA, I doubt it will meet any resistance from President Trump’s veto pen, and it will add yet another exception, for prostitution ads.

That doesn’t bother me in and of itself so much as it would have at other times in my life. Whatever your thoughts on legality, the prostitution business is an ugly thing. These women are not selling their bodies to strangers because things are going well for them. They are abuse victims, single mothers, drug addicts, and other varieties of broken types. The “I’m only doing this to pay for school” line is near universally untrue. A decent society should do everything it reasonably can to discourage prostitution.

Now Craigslist has taken down their entire personals section. In a statement posted to the website they said

Any tool or service can be misused. We can’t take such risk without jeopardizing all our other services, so we are regretfully taking craigslist personals offline. Hopefully we can bring them back some day.

To the millions of spouses, partners, and couples who met through craigslist, we wish you every happiness!

And so the process continues, bit by bit, chipping away at your ability to communicate and make connections.

Anybody who thinks “hate speech” isn’t the next thing to go is kidding themselves.

Learn how to use Tor, and cryptocurrencies, and check out my other privacy tips.

424-3-GO-NAZI or Radical Agenda on Skype if you would like to be on the pogrom.

Join us, this and every Friday, as well as Mondays and Wednesdays from 5-7pm Eastern for another exciting episode of the Radical Agenda. It’s a show about common sense extremism where we talk about radical, crazy, off the wall things like destroying the Internet to protect thots from their own bad decisions.

Watch live and chat on GabTV or PewTube, or listen live on the Radical Radio Network.