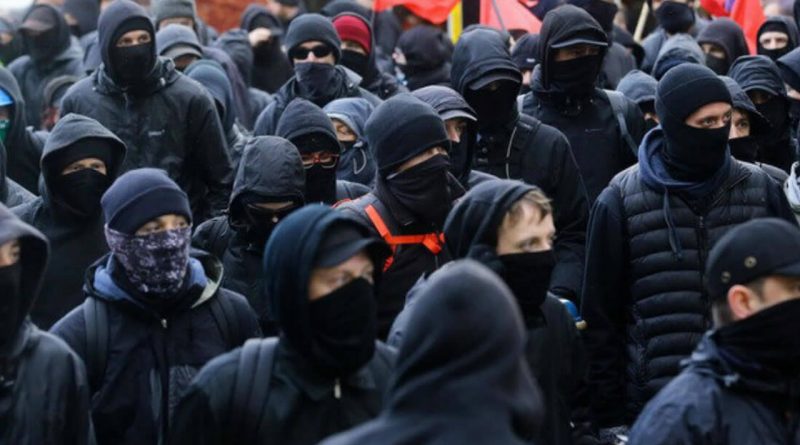 Here at the Radical Agenda, we started off with a pretty grim outlook. This was due in large part to the libertarian ideological viewpoint we began with, resulting in our effort to take on the Left and the Right simultaneously, in the hopes of bringing about a stateless market utopia.

Nationalism proved helpful, and I can’t help but feel grateful to the Left for pushing us that way.

I spent years listening to propaganda equating the political Left and Right. Anybody who wanted to use the government to control the behavior of others, I was convinced, was a “statist” who just needed to read Rothbard, and abandon their superstitious beliefs.

I could have pursued that impotent course for an eternity, were it not for the radical Left trying to infiltrate the libertarian movement. First it was the gays, then the feminists, then the humorously named “Black Lives Matter” idiocy, and finally, transgenderism. Watch all that ideological garbage go on long enough, and you can’t help but contemplate the virtue of Right wing social engineering.

As it turns out, the libertarians were as wrong as the Marxists in assuming that all questions were matters of economic calculation. Money is a means to an end for these people, and that must also become the case for us.

The libertarian movement was of course notoriously White and male. When a bunch of communists came in to tell me that was some kind of problem in need of solving, and every disagreement with their agenda was shouted down as some kind of bigotry, I had enough. It became obvious that there was something uniquely beneficial about White male domination, and “bigotry” was just Leftist slang for “good”.

Literally everything we value about society is deemed “White Supremacy” by the Left today. Freedom, order, merit, objectivity, low time preference, even the attempted racial color blindness most of us spent our lives trying to develop. To them, “transgender women of color” are the highest virtue which all of mankind ought to strive for. Equality of opportunity is itself bigotry. Even equality of outcome is insufficient. Unless we are ruled by, and pay tribute to, mental defectives, sexual deviants, criminals, and fools, we are somehow morally defective ourselves.

This seems to fly in the face of their prior assertions, that morality was some kind of outdated Christian superstition. But the Left’s penchant for double standards and cognitive dissonance is notorious for precisely such reasons, and it becomes more notorious by the day, thanks almost entirely to their own behavior.

In August of 2017, the Alt Right had such incredible momentum, that you really can’t blame people for being afraid of us. They threw every dirty trick in the book at us that terrible weekend, in Charlottesville, Virginia, hoping to stop us in our tracks. They spied on us, they assaulted us, they threatened us, they framed us for crimes, they smeared us in the media, they abused the legal system, they lied in court. There was hardly a disreputable act they did not enthusiastically partake in.

If they stopped there, they would have succeeded. The whole country believed their lies. Even those who knew the truth dared not speak out, for fear of suffering the same attacks.

But they couldn’t help themselves. They had to push further. Self control is of course, to them, just another symptom of White Supremacy.

So when the so called “Nazis” were gone, they attacked prayer groups and regular people. When the actual White Nationalists were deplatformed from social media, search engines, and all major means of syndication, they simply attempted change the definition of White Nationalism. All of a sudden the President of the United States, and the 2nd most popular show in cable news, Tucker Carlson, were White Nationalists, according to them. Jewish commentator Ben Shapiro was branded a Nazi by Google, as was black HUD Secretary, Ben Carson. They actually expected the public to just make this pivot along with them, and predictably, they called everyone who disagreed a Nazi.

In short, the Left is now doing to the broader public, what they did to me and the libertarian movement years ago. They are laying down an ultimatum, where people can either choose their own degradation and ultimate destruction, or they can embrace the far Right. Either choose race realism, traditional gender roles, heteronormativity, economic sanity, and an instinctive hatred of all that is Left wing, or be ruled over by people who hate you and seek your extinction.

Of course, that was always the agenda, but two short years ago they managed to skillfully dress this up in fluffy language about tolerance and inclusion. They distracted the public by taking our humor out of context, and pretending that we were the actual threat to their way of life.

With our message stifled, they could have carried this deception through into a 2020 landslide for the Democrat Party. But again, they are powerless over their own impulses, since impulse control is itself a symptom of White Supremacy.

In some sense, the deplatforming was a gift to us. The average voter has no idea what happened to the Alt Right. They think we ceased to exist in August of 2017. Conservatives have been subjected to the same treatment as us online, and those who remain only do so by avoiding the scrutiny of the censors.

That’s why almost the entire slate of Democrat Presidential candidates, and certainly the entirety of the Leftist press, have gone so far Left that it scares once reliable Democrat constituencies. These people have walled themselves off from all criticism. They live in the cozy confines of their own social circles and Twitter mentions, and they have no concept what the rest of the country is thinking.

They incessantly spout off about paranoid Jewish delusions of “White Supremacy” as some looming threat, and when Tucker Carlson rightly calls it a “hoax” they dutifully use their own platforms to remind the public that White Nationalists are in fact the norm in America. They simultaneously tell us that the entire history, legal system, and consciousness of the Nation, is a relic of White Supremacy, and that White Supremacy is “domestic terrorism” and a threat to that same Nation.

It can’t, and people with a 3 digit IQ know it.

Smart people look at what happened in Portland this weekend, and see the masked communist terrorists attacking people as the real problem.

Still, our movement has suffered no shortage of setbacks in the course of this. My life as I knew it was destroyed by the efforts of our enemies. The jail time, the legal bills, the civil suit, the threats, the defamation, the harassment, the deplatforming, have all created a perfect storm that understandably caused less dedicated Nationalists to walk away.

I keep things in perspective by remembering that the men I was locked up with, still haven’t come home. At least one of them, probably never will. So no matter what they do to me, I will continue to say what needs to be said for as long as I can.

Even though the Left is doing the heavy lifting right now, it is important that we continue our efforts as well. I predict that in 2020, the Left’s excesses will be punished by voters, and the National discourse will shift dramatically rightward as a result.

When that happens, we need to be there, ready to influence that discourse. I truly believe, like many of you, that the Radical Agenda has a great deal of potential. All we need to do is be there when that breakout moment arrives, and the talents I have spent a lifetime developing will finally get the attention they deserve.

But I cannot do this without your financial support.

The most important thing you can do right now, in my opinion, is familiarize yourself with cryptocurrency. The unlawful discrimination we’ve suffered at the hands of Jewish finance have crippled my ability to do business and raise money. A small percentage of supporters have been keeping me afloat, but I won’t make it to November 2020 unless this burden is spread further.

Alternatively, you can become an Outlaw Conservative premium member for just $10/month using your credit or debit card at OutlawConservative.com/join.

You can also hire me to read the text of your choice out loud for just $40 per up to 500 words at PennedAndPronounced.com

You can also mail me donations at

If you have cryptocurrency, you can find all my QR codes and public keys at https://christophercantwell.net/donate/

My public Bitcoin key is 3DtokFHvFP5GxYw7jzJQFKWZUeA1w42ob1

You can purchase cryptocurrencies with a credit card from CoinMama, Changelly, or Uphold.com

Got some crypto you want to trade for another type of crypto? Want to start day trading? Try these crypto only exchanges.