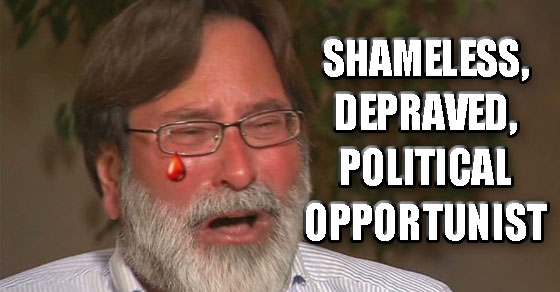 Richard Martinez, father of UCSB shooting victim Christopher Martinez, took his son’s death as an opportunity to push his far left political agenda. In an obviously scripted speech being played all over TV news and the internet, Richard Martinez removed all blame from the shooter, Elliot Rodger, and instead blamed the NRA. We expect this kind of depravity from politicians, and MSNBC, but you would think a father might wait until his son’s body was cold before turning into a camera whoring political opportunist.

Regular readers will recall my article/video titled “Elliot Rodger Is Liberalism Personified” and if you’re not, then I’d encourage you to check those out, especially the comments section. According to the liberal commentators, I was the lowest form of life for politicizing this tragedy. I should be expelled from human society for daring to predict that any minute the left would be trying to exploit this to take from me my means of self defense.

I wonder if they went and echoed those sentiments to Dianne Feinstein when she said;

“Unfortunately the NRA continues to have a stranglehold on Congress, preventing even commonsense measures like universal background checks that have overwhelming support. Americans need to rise up and say enough is enough. Until that happens, we will continue to see these devastating attacks. Shame on us for allowing this to continue.”

Probably not, right? They probably think the Senator is just doing what’s right for the country, by trying her best to steal my weapons and interfere in my life. They probably think it’s just the most common sense thing ever, to respond to six deaths, four of which were inflicted with a knife, by stealing guns. I mean, Elliot Rodger was a crazed gunman running around in a state with some of the most restrictive gun laws in the country, so surely we should hand more power over to congress, an institution that has been responsible for more death and destruction and suffering than any other in the history of mankind. You know, murderers and conquerors and gods and whatnot.

Well, I couldn’t disagree more. Senator Feinstein is the second lowest form of life to ever slither across the Earth. You think I’m so bad for pointing out the obvious problems with a deranged killer, and being really pissed off that predictably politicians will come and try to take what’s mine. All I want is to keep my property and protect myself against guys like Elliot Rodger. The Senator builds on this horrific act of initiatory violence, by trying to take my property and leave me defenseless, and she does so from a position of power. She’s a hell of a lot worse than me. So if I’m scum for politicizing this tragedy, then surely, Senator Feinstein is a lower form of life than scum. Where is the liberal outrage?

Now if I’m scum, and Feinstein is lower than scum, then what does that make Elizabeth Plank from Policy Mic? She went on MSNBC and tried to make this about racism, and not your average race baiting either. She didn’t go out and say this mixed race gentleman was abused by society and snapped as a result. She didn’t imply that any of the shooting victims were targeted because of race, no, no, no, she said “This is a white male thing” blaming the shooting on the white race and male gender. Holy shit woman! Imagine there was some shootout in the ghetto and I blamed this on melanin? I’d have Cathy Reisenwitz and Antonio Buehler trying to have me lynched for such a racist comment. But of course, misandry and blaming white people for all the world’s problems, that goes over just fine with liberals.

Now, I say I’m an asshole right at the headline of my website. Dianne Feinstein is a Senator, so it goes without saying that she is pure evil. Elizabeth Plank is a vile disgusting left wing propagandist and we sort of expect her to hate white men and all good things in the world. But Richard Martinez? Well, you’d think this guy would at least wait for rigor to set in before he started jumping in front of cameras and taking blame away from the guy who murdered his son. Now that’s fuckin low. That shows a level of depravity that we don’t often see in the world. Even Mark Kelly, husband of Gabby Giffords, had the god damn decency to stay out of the gun control debate until his wife was stabilized in the hospital. Even Trayvon Martin’s mother, Sabrina Fulton had the common decorum to wait a few days before politicizing her son’s death. Richard Martinez, he doesn’t even wait until his son’s pupils are dilated before he goes full retard for all the world to see. This guy has all the respect for human life of a drain fly.

Now let’s put this in perspective. Elliot Rodger killed 6 people, and as soon as he met resistance, he took his own life. The world is a better place without Elliot Rodger, can anyone deny this? Thank you for taking your own life Elliot, it may have been the only decent thing you ever did. Gun control can be tied to upwards of 90 million deaths. I think if somebody tramples their own son’s memory with such a murderous political agenda, before he even turns blue, the least he can do for society is take his own life.

If you appreciate the work I do, please consider donating, or advertising here.