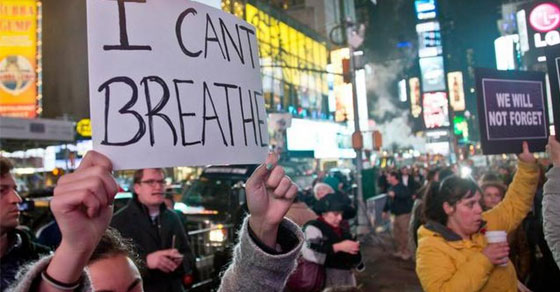 When racial hysteria dominates liberal media, and protests turn into riots, California is never far behind on joining in on the fun. In response to the grand jury decisions not to indict officer Darren Wilson for the shooting of Michael Brown in Ferguson, Missouri, or officer Daniel Pantaleo for the strangulation death of Eric Garner in Staten Island, New York, riots have broken out in Berkeley. To a lesser extent, there is also some talk of Tamir Rice, a 12 year old black child gunned down by a white Cleveland police officer named Timothy Loehmann for carrying a toy gun. Of course, when we’re dealing with the left however, not a whole lot of sympathy when it comes to civilians with guns.

All over the country, protests, peaceful and violent, have come out to chant that “Black Lives Matter”, and freak out about race. Windows of private businesses have been smashed, traffic has been stopped, fires are being set, businesses are being looted, and a demonstrator who tried to intervene was struck with a hammer. America’s suicide by race is well underway.

Meanwhile, a black president who was elected by white voters, and his black attorney general are announcing federal measures to try and ease the pain. Amongst which are instructing federal law enforcement not to profile on the basis of religion, national origin and other characteristics, as well as $75 million in funding to buy body cameras for police.

Giving more equipment to police departments is so far from a solution, it almost makes burning down private businesses look productive by comparison. Cameras have this nasty habit of not working when they have the potential to hold police accountable, and as we saw in the case of Eric Garner, even video evidence of a cold blooded murder is not enough to do something about police brutality. All cameras are going to do is be used as evidence against regular people in the war on drugs, and whatever else the police State feels like lobbing at us in the years to come.

I’d like to say I was surprised by this madness, but I’m not. Actually attempting to address and solve the problems that lead to innocent people dead on the streets at the hands of police is something libertarians have been trying to do for many years. It hasn’t acquired for us any great political success, wealth, or popularity. What acquires wealth and ad revenue for media is stirring up a frenzy and causing people to behave like animals. What acquires votes for politicians is promising people solutions that they have to take no responsibility for, even if those “solutions” will do nothing to address the problem.

At the risk of continuing my own poverty and relative unpopularity, I’ll try and explain this one more time.

What Happened To Michael Brown, Tamir Rice, and Eric Garner?

Michael Brown was a violent criminal. He committed a strong armed robbery, and when he feared being apprehended, he attacked a police officer. He got shot. If he was white, nobody would care. He is a non-story outside of liberal race hysteria. I am not going to care about Michael Brown just because he’s black, and if you do, then you’re a racist. Case closed.

Tamir Rice was shot for having what police believed was a gun. If he was white, liberals would not care, but I would. Whether the gun was real or fake is a non-issue. I live in New Hampshire, I openly carry a .38 revolver. People see my gun all the time. By the standards of the Cleveland PD, I should be gunned down in the street for this. Thus, if you care about the death of Tamir Rice, you should be complaining about gun control.

Eric Garner was seized upon by police for selling untaxed cigarettes. If he was white, liberals would not care, but I would. Executing people in the street for tax evasion is something people are rightfully upset about, but it’s not all that far off from what happens in tax courts every single day. I would not personally feel any better about this case, had Eric Garner been taken into custody without incident, locked in a cage, and stripped of his property. I don’t feel any better about it when hard working people try to keep their own money and are seized upon by the IRS and locked in cages and stripped of their property. Thus, if you care about the death of Eric Garner, you should be complaining about taxation.

I’ll ask regular readers to forgive the repetitiveness of this, but on the off chance one of these race rioters happens to read this, I think it’s really important to understand this underlying concept. Property, and the ownership thereof, is inextricably linked to everything we do in society, and every action of government. Yet, so many people go through life without ever stopping to think about what ownership is.

Ownership is ultimately the right to exercise control over something. I own my computer, and here I sit controlling its keyboard. Should someone else come and take my computer away (exercising control by moving it), without my consent, that would be theft.

I have money in my wallet. I exercise control over that money by either keeping it, or by giving it to someone else. If I exchange money for some other good or service, then the person I bought from now controls the money, and I now control the product purchased, ownership has exchanged hands through mutual consent between the parties. This is not theft, because we both consented to the exchange.

If I have some chairs that I don’t particularly care for, and nobody wants to buy them. I might throw them in the garbage. I might break them into smaller pieces before doing so. I might even throw them in the fire place and burn them. I can destroy my property, because it is mine and I have the exclusive right to control it in any way I see fit.

People don’t like to think of people as being owned. This conjures up images of slavery which we’ve all been taught is a terrible thing of the past. The laws of property and ownership however do extend to human beings, whether anybody wants to think about it or not, and most of human history has accepted that human beings have owners.

I’d like to think that I own myself. I have an owner, and I am him. This is the only way to avoid that whole slavery conundrum. If a human being owns himself, then he is nobody’s slave. He is free to control his own life, make his own decisions, acquire property, and do with it as he sees fit. He can sit around the house all day and do nothing but preserve himself, presuming he has the resources to do so. He can sell himself by the hour, by working for a wage. He can even end his own life if he sees fit, after all, he is his own property, and owning something means one has the right to destroy it.

Now, if someone else decides that they control my life, what does that make me? The right to control property is commonly known as ownership, as we just discussed. If I control myself, then I own myself, and I am free. If someone else controls me, then I am the property of someone else, and thus I am a slave.

Our Relationship with the “Government”

Most people accept the notion that a government has the right to control them to varying extents. This puzzles me, because I’ve never actually seen a government. I’ve seen guys in uniforms and robes. I’ve seen buildings and documents. Never have I seen a “government” though.

Think about it, what does “the government” look like? Where is it located? Can you touch it?

People who like the government, herein, the State, they come up with all sorts of absurd notions at this point. Cosmic dogmatic fantasies about “social contracts” and “the will of the people” are often uttered, but we’ll never see any of them point to the object or entity known as the State. The reason for this is simple, it does not exist. The concept is just as imaginary as any number of forgotten religions.

The government, or, the State, is a behavior. It is a thing that people do. Not an object, not an entity, not a man, or building, or document. It is nothing more than an excuse to do things, that most people would otherwise find quite repugnant. People who claim to work for this non-existent government will for example, steal. They call it fines, or taxation, but if you or I did it, people would rightly call it theft. They kidnap, and call it arrest. They murder, and call it war, or execution, or otherwise “justified in the line of duty”.

If you accept the legitimacy of these excuses, then you really have no right to complain about Eric Garner, Michael Brown, or Tamir Rice. If the people who call themselves the government have the right to control us, then those people are our owners. We are the property of the people who call themselves the State. As property of these fine folks, we are theirs to do with as they see fit. They can take our property away, they can put us where they want, even if it is in a cage, or they can destroy us just like I can destroy my chairs.

If you really do care about Michael Brown, Eric Garner, or Tamir Rice, if you really care about the police brutality that happens every single day, then let’s try and address the actual problem. Hint – this isn’t about race – this is about ownership.

The good news is, this isn’t half as complicated as some people would make it out to be. You don’t have to elect just the right set of people to thousands of political offices around the world to fix this problem. You don’t need to turn the world into an Orwellian surveillance state by giving wearable camcorders to the people who kidnap and murder us on the street. You certainly don’t need to burn down businesses, set fires, or hit your fellow demonstrators with hammers. You don’t even need to demand racial equality or tolerance.

I know, I know, a world without police kinda freaks you out, right? You were raised by a government school and told that government is the only thing separating us from the wolves.

The bad news is, most people are never going to consider what I’ve just proposed. Most people are just going to keep on freaking out in the streets, screaming about race, hurting innocent people, and demanding a non-existent “government” steal more money from all of us, thereby exacerbating the problem. They prefer martyrs over solutions, hysteria over reason, politics over philosophy, “free stuff” over economics, and violence over peace.

So don’t sit around waiting for democracy to solve this, because that’s never going to happen. The majority is screwed.

Instead, get used to the idea that somebody, somewhere, is going to have to do something, to stop this from happening.

“It does not take a majority to prevail… but rather an irate, tireless minority, keen on setting brushfires of freedom in the minds of men.” ~Samuel Adams