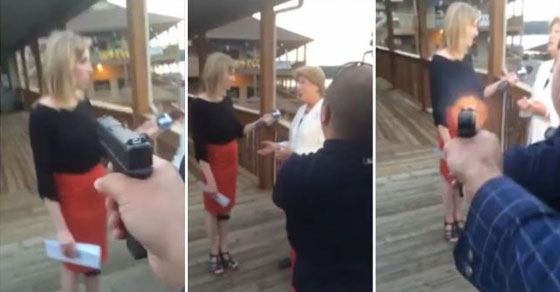 The shooting was captured from two different camera angles, one of which was airing live on the WDBJ7 news station. The victims are seen in their final moments, at the Bridgewater Plaza, a recreational facility with shops, restaurants, a mini golf course and boat rentals. Alison is seen interviewing Vicki Gardner, executive director of the Smith Mountain Lake Chamber of Commerce. Adam Ward held the news station’s camera, alternating between filming Alison and Vicki, and the scenery behind them. Vester Flanagan had his camera out as well, and was apparently live streaming his approach. You can see his weapon drawn on camera as he approaches the scene of the interview. At first nobody notices him, he utters “bitch,” backs up and pauses, as if he felt bad about interrupting, before advancing and opening fire. Alison Parker was hit first, screamed and began running away before she succumbed to her wounds. Adam is struck, and his camera is dropped. Adam can be heard shouting “Oh my g-” before another gunshot ends his life. Vicki Gardner was also hit, but is now recovering after surgery.

Vester Flanagan managed to escape from the scene in his 2009 Ford Mustang. He dropped that vehicle at the airport and picked up his rented Chevrolet Sonic, in an apparent effort to throw police off his trail. This seemed quite senseless since he had uploaded the video of the shooting to social media and bragged about it on Twitter. It was also unsuccessful. Police quickly determined Flanagan had rented the Sonic, the license plate went out over the radio, and within seconds it came up from a license plate scanner mounted to the vehicle of Virginia State Trooper, Pamela Neff on I-66. Neff called for backup and attempted to stop the vehicle, but Flanagan fled, before putting a bullet in his own brain and going off the road. He was airlifted to Inova Fairfax Hospital, where he was pronounced dead at approximately 1:26 p.m.

Now, leftist fanatics from all circles are trying to blame the usual suspects. Guns, misogyny, racism, homophobia, you know the drill.

But Vester Flanagan was not a tea party gun nut capitalist. He was neither white nationalist, nor anti-government radical. In a 23 page suicide note faxed to ABC, he describes being a black homosexual who sensed racism and homophobia everywhere around him. He wanted revenge on his white heterosexual oppressors, and said the Charleston church shooting perpetrated by Dylan Roof was his trigger point. The entire transcript has not been released, but ABC has released the following quotes from it.

“What sent me over the top was the church shooting. And my hollow point bullets have the victims’ initials on them.”

“As for Dylann Roof? You (deleted)! You want a race war (deleted)? BRING IT THEN YOU WHITE …(deleted)!!!” He said Jehovah spoke to him, telling him to act.

“Yes, it will sound like I am angry…I am. And I have every right to be. But when I leave this Earth, the only emotion I want to feel is peace….”

“The church shooting was the tipping point…but my anger has been building steadily…I’ve been a human powder keg for a while…just waiting to go BOOM!!!!”

But there was a lot that led up to this. Flanagan had a long history of racial hypersensitivity.

“Vester was an unhappy man,” WDBJ station manager Jeff Marks told CNN. “We employed him as a reporter and he had some talent in that respect and some experience. He quickly gathered a reputation of someone who was difficult to work with. He was sort of looking out to people to say things he could take offense to. Eventually, after many incidents of his anger, we dismissed him. He did not take that well. We had to call police to escort him from the building.”

Marks also said he believed Flanagan had fabricated incidents of racial discrimination during his time at the station.

“You can tell he was obviously very, very angry at the termination,” WDBJ news director Kelly Zuber tells USA TODAY. “We understand he continued to live in Roanoke. But why today? Why them? We just don’t know. There was no warning of this. We had no contact with him at all, and then suddenly this happened.”

Prior to working at WDBJ, Flanagan worked as a reporter for NBC affiliate WTWC-TV in Tallahassee, Florida. After fired for his “poor work ethic” in March 2000, Flanagan filed a civil lawsuit against WTWC alleging racial discrimination. Flanagan also allegedly threatened to file a complaint with the Equal Employment Opportunity Commission (EEOC). Flanagan’s lawsuit against WTWC was settled under unspecified terms in January 2001. Former colleagues at WTWC later stated that Flanagan was fired for his poor work ethic and that he had fabricated his allegations of discrimination.

After the shooting in Charleston, all these liberal fanatics wanted to take down the Confederate Flag. There were protests and stand offs between Klansmen and Black Panthers. Retailers like Walmart, and Amazon, ended sales of the flag, as if the fucking Dukes of Hazzard were the motivation for some lunatic murdering innocent strangers. The ties between Dylann Roof’s actions and the banner of the injured party in the war of northern aggression, are shoddy at best. We can however say with some confidence that racism motivated Dylann Roof.

Likewise, we can say with absolute confidence that social justice warrior lunacy motivated Vester Flanagan. He was a black, gay, narcissist who posted photos of himself incessantly on social media. He perpetually conjured false accusations of racism and homophobia. He repeatedly sued and harassed people through the legal system. He couldn’t possibly imagine that his life was shit, and people hated him, because he was a lying narcissist, the type of guy to gun down innocent young people in broad daylight, and brag about it to the world. No, it had to be because he was black, and gay.

Vester Flanagan was a full blown social justice warrior, whose fury had been fueled by the rhetoric of leftist politicians and politically correct media. He was told day, after day, after day, that he was a victim, and that his aggressor was white heterosexuality. He was told that the government could, and should, use force against these oppressors to grant him the equality that he was owed, but that it refused to do so because of the oppressors. So he did what anybody would do when met with a hopeless struggle against a monolithic system of oppression and injustice, one which could never be defeated due to its intangible non-existence. He snapped.

And as the race, gender, and sexuality propaganda grows increasingly divisive, as identity politics replaces reason and evidence, as government violence is immediately deemed the solution to every real and imagined dispute, we can predict with confidence that we’ll see many more Vester Flanagans in the future.