Full retard is presently being redefined by Antonio Buehler. After exposing his fake “Jane Aggies” persona Wednesday, Buehler went into panic mode and began trying to cover up his deception.

First, he took down the photos of Laura Carter, and changed the name of the profile to “Anarcho Capitalism” (something Antonio has previously condemned as racist). 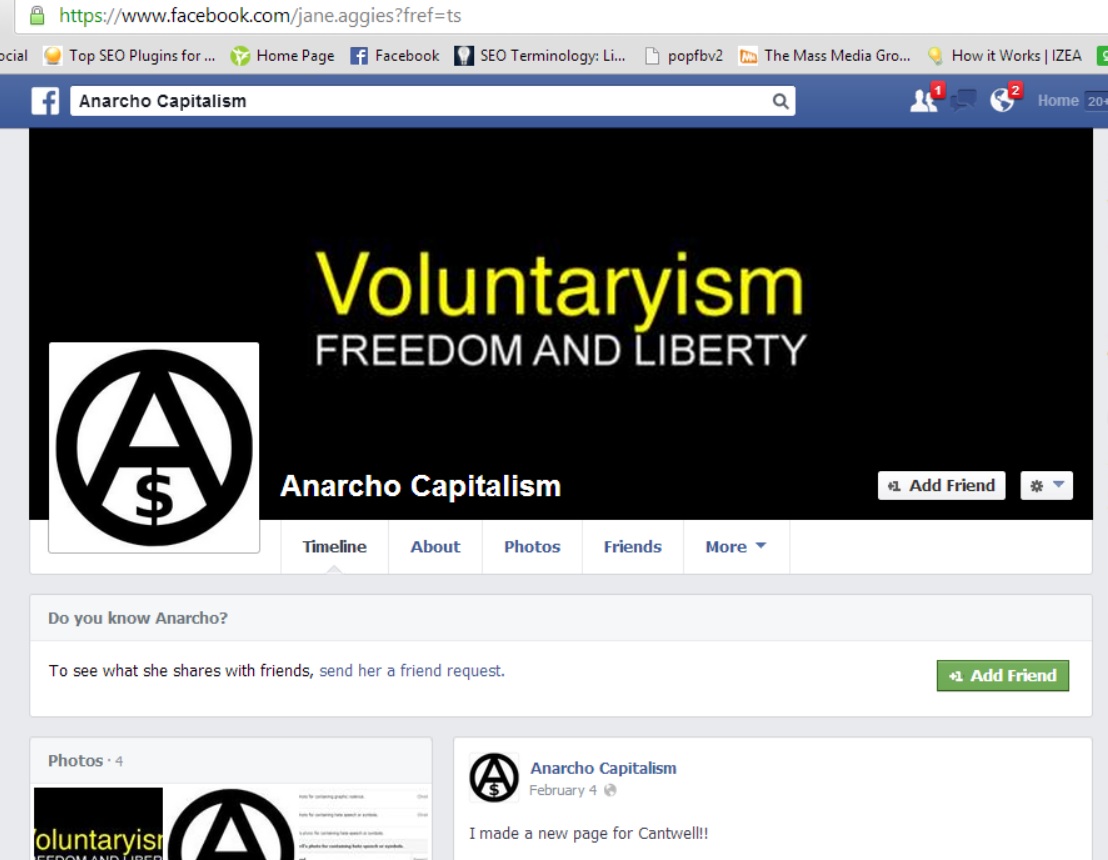 Then, the profile was deactivated 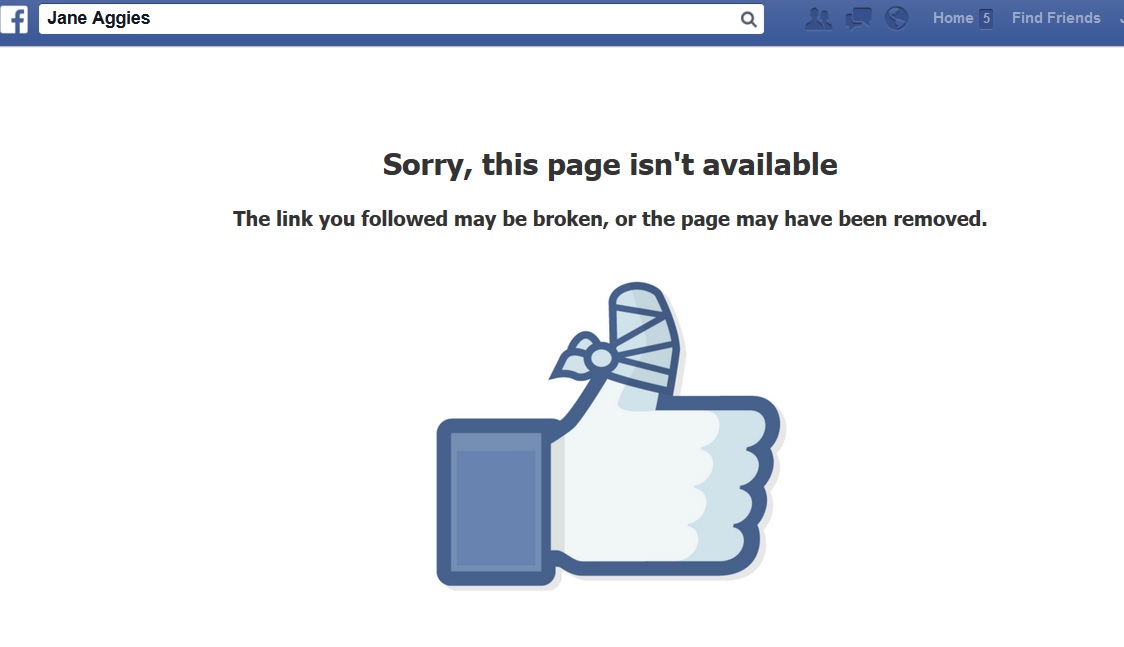 Then, the profile came back again. This time with a new photo, of a different woman.

Hrmmm, who’s that cropped out of the photo? 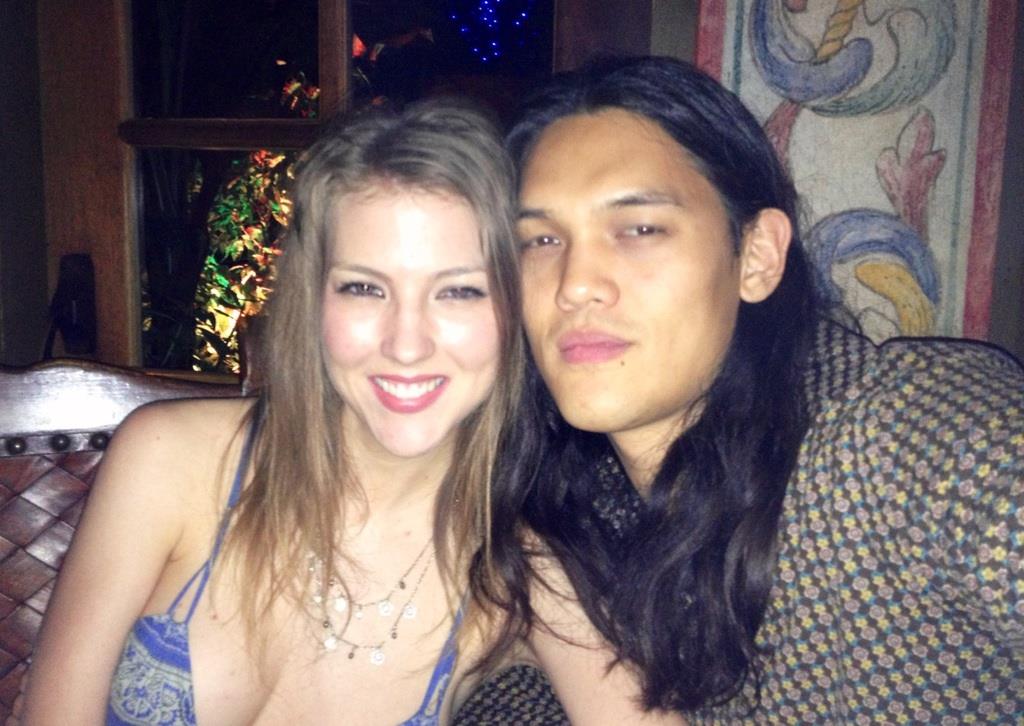 “Jane” then posted the following message with a link to my article from Wednesday. 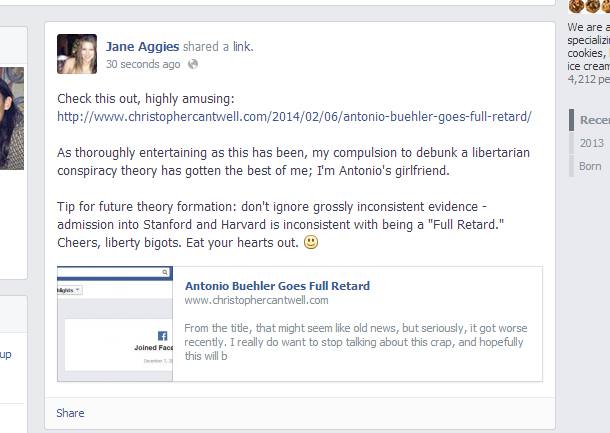 Wow, I guess I got owned, huh? I mean, how could a retard get into these high end schools? (Cough, Paul Krugman, cough, George Bush, cough) No, congrats on that, really. Everybody knows it’s only idiots like me who see the American education system as a complete waste of time and money, and get out before they spend the best years of their lives, and tens of thousands of dollars of their parents money, on academia. The path of the true genius is High School, then military, then college, then liberal activism, just like all those other really bright folks in Zuccotti Park, sleeping in their own shit and screaming about how I should be forced to pay off their student loan debt.

Side note, I’m pretty sure Antonio is paying people to do his school work. This retard can barely spell his own name, and even with all mommy and daddy’s money, even with his minority advantages, even with his service to the State, even with George W. Bush as our standard for acceptance to these schools, I don’t for one second believe he’s making it on his own merits. If you have information on any academic fraud by Antonio Buehler, I’m willing to pay, use the contact form on this website.

After all, Martin Luthor King was a plagiarist, so that’s something Antonio might aspire to be as well, and if you point that out, he’ll just call you a racist!

Speaking of inconsistent evidence, back to the girlfriend thing. I’m still pretty sure this is Antonio, in fact, I’m betting $50 he doesn’t even have a girlfriend. I’ve offered $50 to the charity of Antonio’s choice for a photo of them holding today’s newspaper. It’s been over 36 hours, and Antonio hasn’t responded yet.

@AntonioBuehler, I’ll donate $50 to the charity of your choice for a photo of you and your “girlfriend” holding tomorrows newspaper.

Why wouldn’t he post a photo with his girlfriend for $50? Because he cannot produce one. There is only the one photo of this woman that anyone I know can find, and we’re pretty good at this stuff. It is the cropped photo in the Jane Aggies profile, which is an altered photo from Antonio’s profile, where he calls her “Marie”. Update, immediately after this article was published, Jonathan Thriftwood uploaded a new photo to “his” profile. 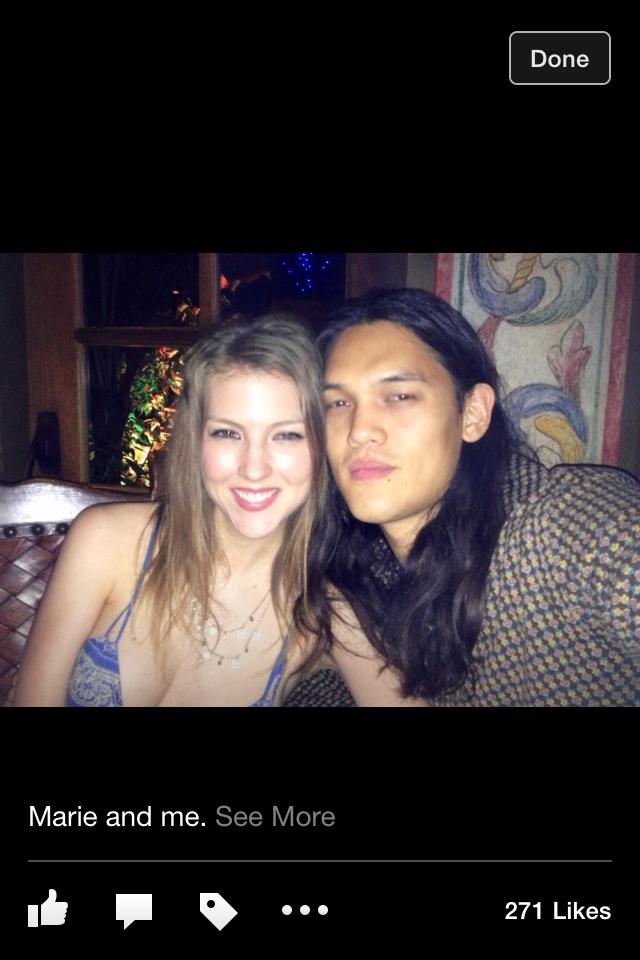 That photo was uploaded on November 10th 2013

It’s the only photo of this “girlfriend” anywhere, including on “her” own profile.

The EXIF Data for the photo, shows the ICC Header date being in 2012

“Jane” claims to live in Keene, NH. Funny, I used to live just outside of Keene. I never met her. Come to think of it, nobody has. Even on her photo in Antonio’s album, nobody identifies as knowing her. Lot’s of people complimenting her looks, and asking who she is, but nobody, not even Antonio, answers them, not to this day.

If “Jane” lives in Keene, then why is she using Antonio’s IP address? Is Antonio giving away access to the Harvard Grad school VPN? I’m pretty sure there’s rules about that… Even if “Jane” is lying about living in Keene, even if she’s in Austin with Antonio, it doesn’t make sense for her to be using Antonio’s VPN, unless she’s logging in to do his schoolwork for him. They have been engaged in (fake) discussions with each other, having comments within minutes of each other. This would mean he was stepping away from his computer, and then letting her use it, to reply to his comment, and tag him, only so he could sit back down, log back in, and like the comment.

Why are there only 5 posts on Jane’s page? Why are all of them about me?

Now, Antonio is a government mercenary. It makes sense for him to invite violence upon himself. Does anybody really believe Antonio’s girlfriend is inviting me to violence?

Did this imbecile just get his personas confused? We’re not actually thinking about it that much, Antonio. Our minds just work faster than yours and this is the most hilariously obvious and pathetic display I’ve ever seen in over 20 years of online communications.

Now, here’s the funniest part in my book. 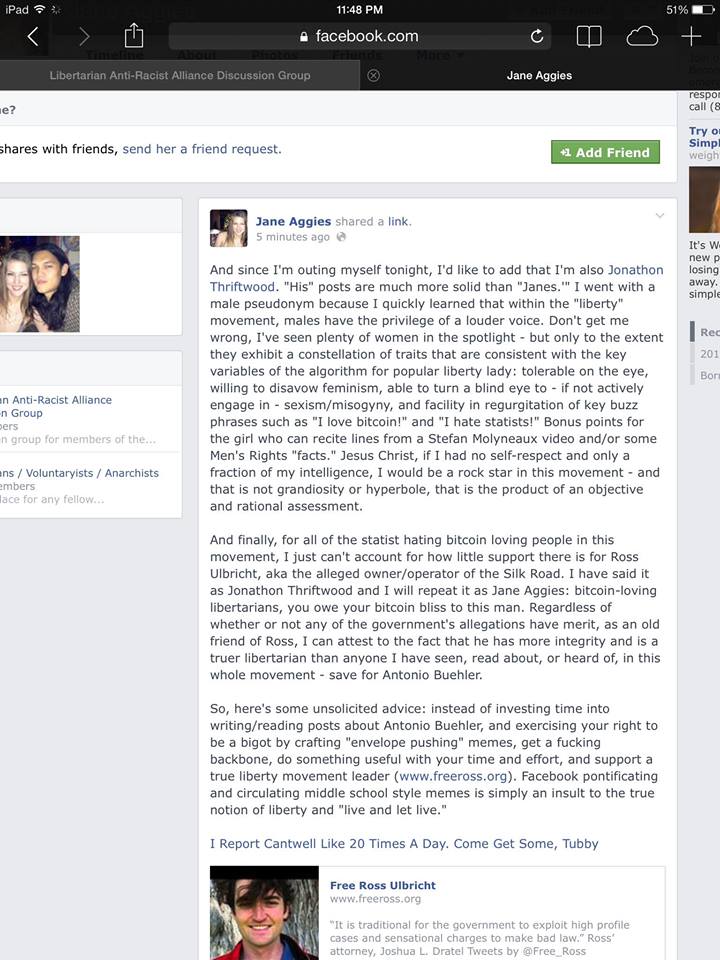 First of all, only someone who has been collecting dust for the last 40 years could possibly think being a female is a disadvantage in the “liberty movement”. Even completely brainless female content producers like “Libertarian Anne” quickly gain thousands upon thousands of followers, exceeding that of far more intelligent, entertaining, talented and capable male production teams. This “movement” is saturated with desperate single men who throw likes, comments, subscriptions, dollars, and bitcoins at anything that sits down to pee.

The reason people who don’t disavow feminism have no voice in libertarian circles, is because feminism has no more a place in libertarian circles, than white supremacy. Neither do any of your baseless, incessant cries of racism, homophobia, or this insane notion of “rape culture”. We see individuals as individuals, so we don’t care any more about women than men, or blacks than whites, or gays than straights. We don’t get any more pissed off about black jokes, than we do about Irish jokes, and we know that jokes do not cause women to get raped, any more than cancer jokes cause people to get rabies. All your liberal PC nonsense is nothing more than an effort to turn the tables of oppression, instead of ending it. You put women above men, blacks above whites, gays above straights, and that completely defeats the purpose. These simple truths are why I’ve been able to cost Antonio over a thousand Facebook friends, and two points off his Klout score. It’s why ChristopherCantwell.com is one of the most popular libertarian websites on Earth, and the Peaceful Streets Project, Buehler Ed, and all his other half assed, plagiarized, wannabe projects are collecting dust. It’s why all of my measurements of success have increased since he started this mess four months ago, while all of his have declined. I’ve exposed him for a fucking liberal. That’s why Antonio is coming to the very correct conclusion, that there is no place for him in the “liberty movement”. He belongs in a tent at Zuccotti Park with the other flea infested Occupy Wall Street shitheads, not on a stage at the Porcupine Freedom Festival next to talented, intelligent libertarians.

Secondly, “Jonathan Thriftwood“, who joined facebook in August of 2013, no doubt as some other Buehler troll account, has ZERO public posts, and only 13 facebook friends (Same as Jane). He is in only one Facebook group “Free Antonio Buehler”, and he likes 1 page “Association of Libertarian Feminists”. So clearly, if Jane, or Marie, or whatever Antonio has named this fantasy woman, wanted to actually use her fake penis to gain some traction, she’s done an absolutely fucking miserable job of doing so.

Like everything else Antonio and all his leftist liar comrades do, this is nothing more than the saddest attempt in the history of electronic communications, to obfuscate facts and identities. This is no doubt at least part of the reason Antonio unfriended all of our mutual friends, and blocks everybody who disagrees with him on Facebook. Because to allow his remaining followers to see what’s actually happening would throttle him into obscurity, faster than a one way rendition trip to Guantanamo.

The saddest part of all this, is that nobody has stepped up to confirm or deny the girlfriend. Even if this woman isn’t just some desperate attempt to cover up previous lies, this can only mean that Antonio has nobody in his real world life close enough to even know if he would have a girlfriend or not.

If I posted about a girlfriend, the people I actually talk to in real life would have something to say about her, other than to comment on her looks. Wouldn’t the people in yours? There would be photos of us all over the place, we wouldn’t be sharing a single camera phone shot between the two of us years later.

It would seem, that Antonio has as much trouble building interpersonal relationships in real life, as he does keeping his lies straight on the Internet. As a result, he has found himself the loneliest son of a bitch this side of solitary confinement, and if he has an ounce of fucking dignity left, he’ll hop in the tub with a razor blade and a bottle of vodka.

For your amusement, here’s some other people who faked having girlfriends. 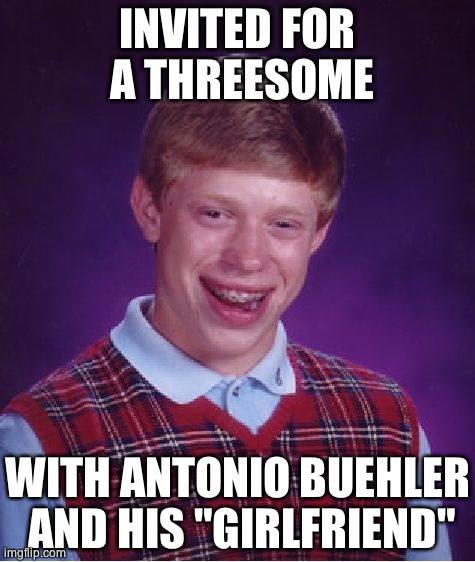